ELEX II - Wants to be Mass Effect But Its not Working

GamePressure has an editorial on ELEX II's apparent desire to be Mass Effect and how it isn't working. Please note that this essay contains spoilers on main plot points and characters.

You can also find some similarities here. Doesn't the hostile lair look like a Collector's base? The conversation with the avatar of Jax's son is strikingly similar to talking to Catalyst - only thing missing are three different-colored endings. I was a bit amused to see Piranha Bytes try to emulate dark sci-fi, but using a story that seems like it's straight from pulp magazines. 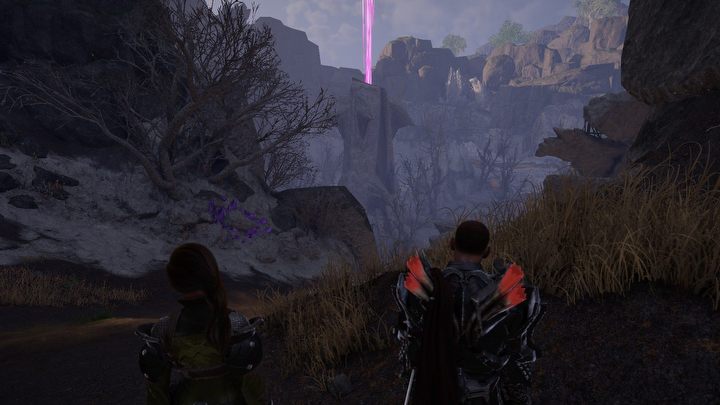 Saving the world in Elex 2 is devoid of drama.

Even in terms of mechanics, the German studio wants to swing with the zeitgeist. Risen 2 allowed us to explore the world with a selected companion by our side, and the first Elex introduced a romance system, which used to be BioWare's signature. I have read in the announcements that the love threads would be deep - but unfortunately, the relationships with the characters have the cloying taste of naivety, and their adventures are void of any dramatic expression. This is, by the way, is the crux of the problem for Piranha Bytes, and they cannot seem to be able to deal with it. It doesn't tell the story on a grand scale, it doesn't let you really feel like you're facing an evil that's capable of destroying all of humanity, and it does not engage you emotionally. Where the writers try to introduce drama, they only expose the game's weaknesses.

I'm not going to roast PB at this point.

The only part that saddens me is knowing how many people with actual talent are out there, without the opportunity to show it off to the world - and instead, the resources and the ability to publish games fall into products like Elex II.

But in the end, it's their money, their work, and I am sure in some way they are passionate about what they do, so it's their right to publish whatever the hell they want if they can afford it.

If anyone can get any enjoyment out of something like this, that's better than if the game hadn't been released at all, so there is that.
S

Hopefully, we are done with the sci-fi cringe and Piranha returns to what they do best -- fantasy RPGs. This time something in a grimdark setting, please.

I don't remember Miranda's butt in Elex2 so whatever drugs GamePressure is using, they should probably stop.
Toka Koka

I've played Elex II for a little over 50 hrs and to me it has some replay-ability issues. Absurd number of single handed weapons and modding those weapons is a challenge not actually worth it for 90% of the lower-end weapons; and why can't we mod clothing. The mini-map and underground map system are useless for navigating or non-existent. The dialog does get a bit negative. Managing the log system requires note taking on the side, which I don't mind, however, if PB wants the experience to be immersive then give us the ability to put notes on the map, or allow following an entire quest without having to go back into the log menu after ever encounter; threads of a quest need to be constantly checked off in the log system which is very clunky. Visuals are very good, the jetpack makes all the difference. Glad I played it, not sure I'll replay.

I've played around 10 hours and stopped (Elden Rings started finally working for me).
I didn't feel engaged by the game. I like the ideas, but all feels "sterile". Like if everything is built following a formula, but it doesn't feel personal. And the missions are too much busy work. Go fetch this, go kill that. Not real stories, no real characters. Nothing inspiring, to make it worth it, so far.

I'll go back to it, when I get tired of Elden Ring. But to just think that back and forth those missions are, It just feels like work instead of fun. Fetch quests that have sub-fetch quests are really annoying to me. Go see what happened to the workers of the mine. Go get maks and go get workers for the mine. To get the workers, post ads on the main areas of the village. To be allowed to do that, do this side quest to this NPC. And to do that, you'll also have to go X, get Y, so you can do Z to A, after B is done…

Also, character evolution is glacial. So it makes everything feel even more grindy than it needed to be.

joxer said:
I don't remember Miranda's butt in Elex2 so whatever drugs GamePressure is using, they should probably stop.
Click to expand...

Perhaps they played with a mod?
The very powerful and the very stupid have one thing in common: instead of altering their views to fit the facts, they alter the facts to fit their views…
-- Doctor Who in "Face of Evil"

If you are looking for "character emotions" in a PB game and play it for anything but the exploration, world building and enjoyment of growing from a (relatively) powerless wimp to a powerhouse, you're really in it for the wrong reasons.

Unfortunately, PB themselves still need to realize what are they strengths and weaknesses and stop trying to make their weaknesses into strengths.

Mass Effect games and PB games have nothing in common and I don't think PB tries to imitate them at all.

Maybe they copy some of the world, armour, weapon designs from Fallout or Mass Effect, but gameplay-wise I see not many similarities.

I didn't think about Mass Effect even once when I played Elex. I guess if they were aiming for it then they failed? I played all 3 Mass Effects and put nearly 100 hours into Elex.
Favourite RPGs of all time: Wizardry 6, Ultima 7/7.2, Fallout2, Planescape Torment, Baldurs Gate 2+TOB, Jagged Alliance 2, Ravenloft: The stone prophet, Gothic 2, Realms of Arkania:Blade of destiny (not the HD version!!) and Secret of the Silver Blades.

I'm another that found zero connections between Elex and the Mass Junk universes. And that's a very good thing in my book, I'm hoping for a similar lack of connections in the second game, when I get around to purchasing and playing it.

bjon045 said:
I didn't think about Mass Effect even once when I played Elex. I guess if they were aiming for it then they failed? I played all 3 Mass Effects and put nearly 100 hours into Elex.
Click to expand...

The article is absurd. Let's mention Mass Effect in the title, and point out some superficial similarities, to get more clicks.

No one who's a fan of either game is going to play the other thinking it's more of the same unless they're completely unfamiliar with the developers.

I'm thankful ELEX II isn't another Mass Effect though. If I wanted to play another linear shooter with RPG elements, there are other games out there.

haven't played 2 but i spent some time with first one and one thing i know without a doubt : elex never tried to be mass effect.

Moriendor said:
Well, I think the moral system of cold vs. warm and creation vs. destruction is inspired by the paragon vs. renegade system of ME.
Click to expand...

True. Now that you mention it, that's also quite obvious in the two female companions, Caja and Nasty.

By coincidence I played ME2 just last week and am now playing Elex 1. While there are elements that did seem reminiscent of Mass Effect, the games themselves are completely different.

How else would you expect a site like this to gain click interest if not mentioning two popular (and one might say unrelated) games in the title? Apples and oranges - discuss!

Anyone who read the article would realise that it's not about how the game plays, its controls or its systems, but the parallelism in plot points with relatable NPCs, factions and mission arcs - probably also the mediatic impact amongst the RPG communities of the world that the developers aim to achieve; but in Elex II it's done so poorly that it ranges from shaming to comically bad, if we were to compare one game to another. There is nothing inspiring that will leave the player awestruck in Elex II, nothing grand, or emotionally touching. Feelings that shared commonly the majority of those who played Mass Effect II.

I will agree that it's significantly easier to make demagogic, effortless, half-witted posts about "media is dumb, I'm so clever" to get all the PB loving circlejerk on your tail than exercising reading comprehension and critical thinking. This is the way, so sayeth the Mandalorian.

Nereida said:
I will agree that it's significantly easier to make demagogic, effortless, half-witted posts about "media is dumb, I'm so clever" to get all the PB loving circlejerk on your tail than exercising reading comprehension and critical thinking. This is the way, so sayeth the Mandalorian.
Click to expand...

People who are capable of exercising reading comprehension and critical thinking - and actually knowing the games - will realize very quickly when reading that article that the entire premise is completely nonsensical and utterly beyond the point of the games.
Someone wrote that article for the sake of getting some words out and nothing more.

When you squint and squeeze hard enough, you can make any absurd comparion.
How about the story of Murder She Wrote episodes and Attack On Titan?
Or how Star Wars makes you "feel" vs the Bible?

There is nothing inspiring that will leave the player awestruck in Elex II, nothing grand, or emotionally touching. Feelings that shared commonly the majority of those who played Mass Effect II.
Click to expand...

Everyone knows this.
Nobody sane plays PB games to get "emotionally touched".
It's been like this for decades now.

Moriendor said:
Yep. Let’s keep ignoring the fact that PB THEMSELVES mentioned ME as a huge source of inspiration for ELEX and let us keep reaffirming each other about three dozen more times that there is absolutely nooooooo similarities whatsoever between the games

Except nobody said that.
This is a bit weak as far as strawmen go, you know.