Those shots look really nice to me, keep up the great work and thanks for keeping us informed! 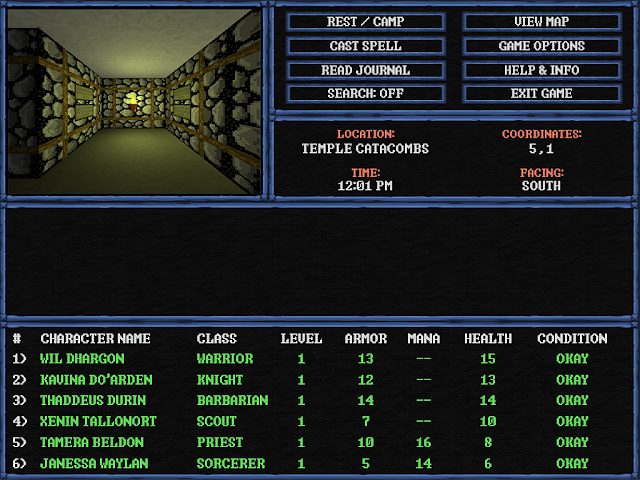 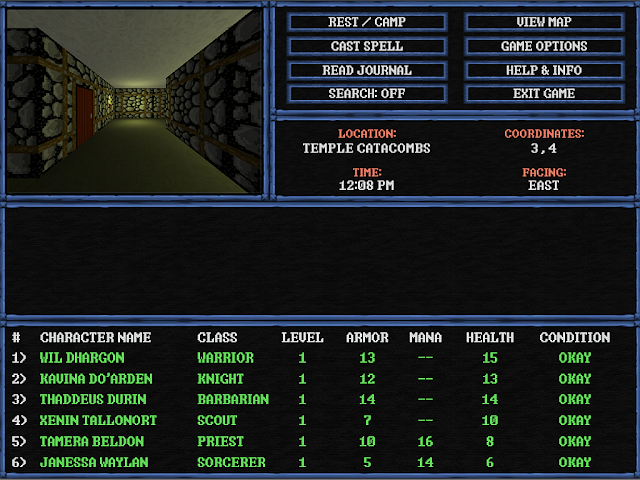 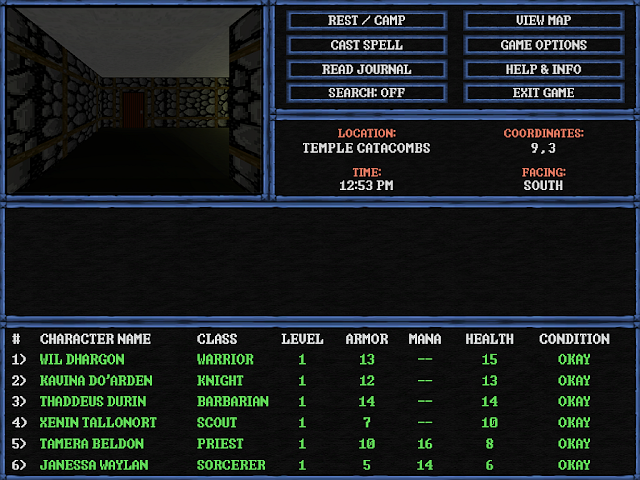 Well, now I wish I hadn't even mentioned it. It turns out there were some issues with it that would probably require a lot of work to get functioning in a way that would satisfy everyone. So, with that in mind, I'm just going to use consistent lighting (like the Gold-Box games did). So, maps will look more like this: 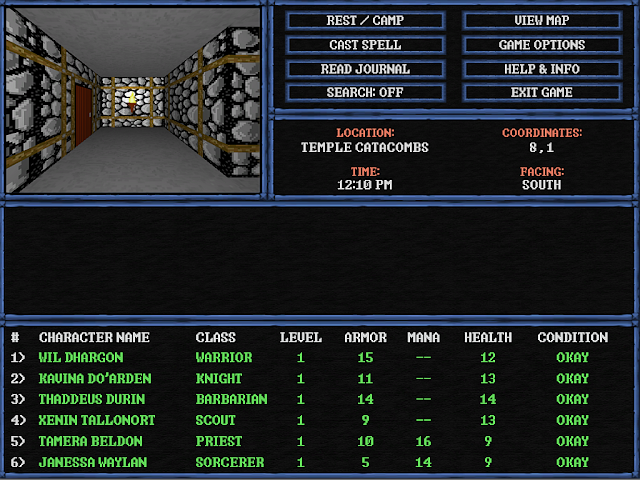 The dynamic lighting did look nice. Either way is fine and the consistent lighting looks good also. I think this game is coming along nicely and it almost looks like a mix of Might and Magic and the Gold Box games. That's a very nice combination.
"From knowledge springs Power, just as weakness stems from Ignorance."

Whatever lighting you pick will be fine with me. Either way, I look forward to playing this sometime in the future.

I like to pop in once in a while just to let people know that the project is still alive and there's progress being made. These days, it's all about creating content, building areas, tweaking systems, etc.

Since I don't want to spoil things, the best I can do on occasion is maybe show off some areas in progress. Currently working on some sewers…

Decided this week to knock out the thing I dreaded the most...a system that would allow the player to both Save and Load games in progress. Turned out not to be nearly as hard as I thought it would be, so I knocked it out rather quickly.

There are six save game slots (probably more than most people will need). As you can see in the image below, the game both offers an automatic naming scheme (location and game time) as well as the option to name the saves yourself. If you're like me, you probably prefer to give a descriptive name rather than just leave it at location and game time, but I don't speak for everyone, so both options are available: 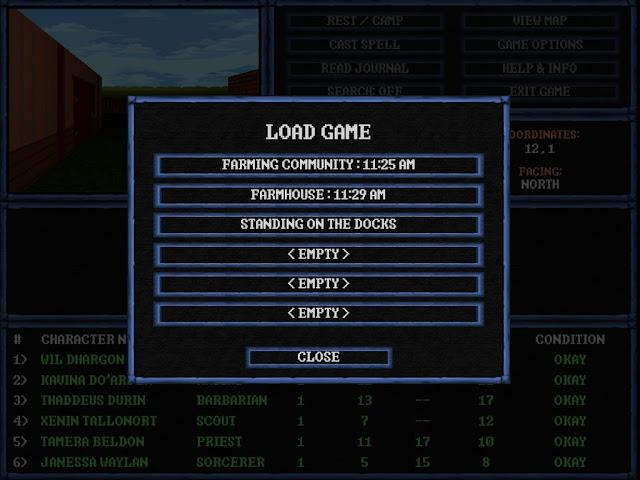 Not that you can tell from just this picture, but here I have loaded a game I saved previously. Took the screenshot right after loading it. If you look up at the games saved in the previous picture, though, you'll see that there's a save set to the "Farming Community" at game time "11:25 AM," and that's the game I loaded: 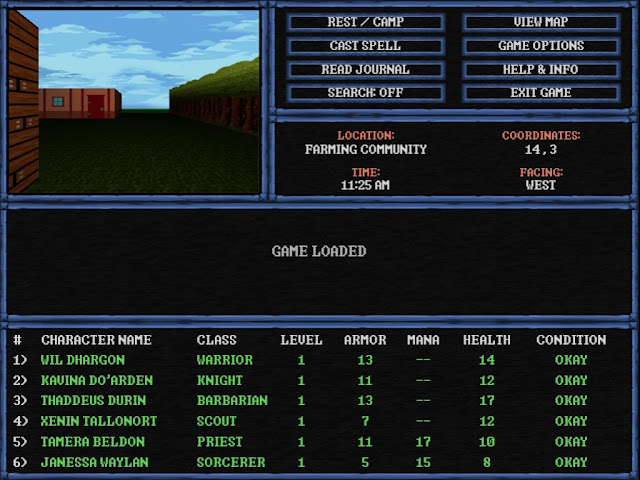 So, it's another thing I can take off the checklist, I suppose.

I'd say six save slots are plenty, certainly enough for me. All I really care about is being able to save when I'm ready to take a break and not have to reach a certain spot to do so.

You can save anywhere in the game, provided you aren’t in an event or in combat.

That's all I need to know, count me in as a buyer when this is available!!

Unlike the Gold Box games, you don’t even have to be in a Camp to save the game. So, there’s a lot of flexibility.

I just realized I haven't posted here in a while. As I've said before, I like to post occasional screenshots to let folks know that things are still rolling along... 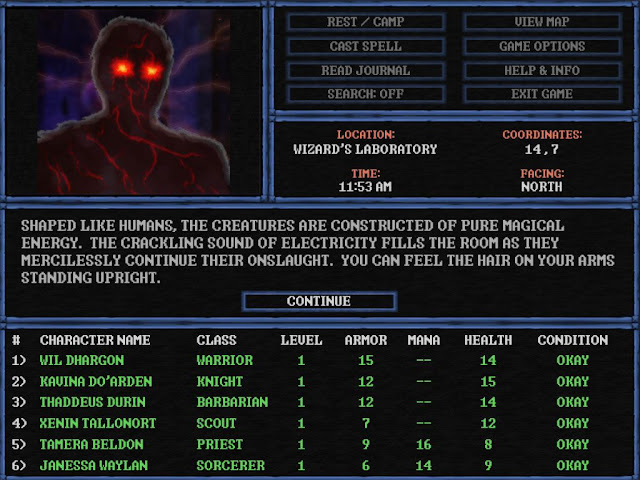 im loving this keep up the good worke

Work continues on the game. Don't want anyone to think this thing is dead.

Just realized the last few months have been spent fleshing out areas that are optional and that a player may not even ever see, depending on the choices they make and whether or not they choose to explore them. 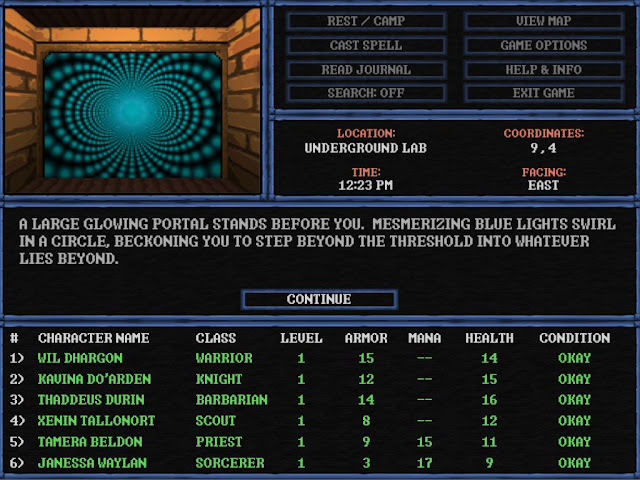 can we test the demo please

So, I'm experimenting with trying to move the game into widescreen. The original game was intended to be in 4:3 aspect ratio, but I've started to think that maybe I should shoot for 16:9 and 16:10, since they tend to be the most common screens available.

However, I'm worried that the widescreen version might betray the original intention of the layout, which was to a) replicate the feel of the Gold-Box games and b) keep the artwork as an abstract (which can be harder to pull off when the graphics are larger).

That being said, I've seen games with worse graphics pull this kind of thing off. But, I'm torn. So any feedback about the layout would be great. If you like it, let me know.

Also, if you like it, let me know if I should use character portraits instead of character icons on the main screen. If you don't like it, then it won't matter.

One final thing...please ignore the panel at the bottom of the screen. I haven't done anything with it. If I end up sticking with this, I'd like to add a compass down there at some point and display the location information differently. 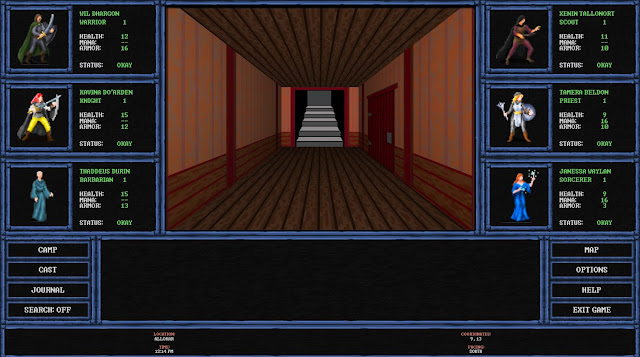 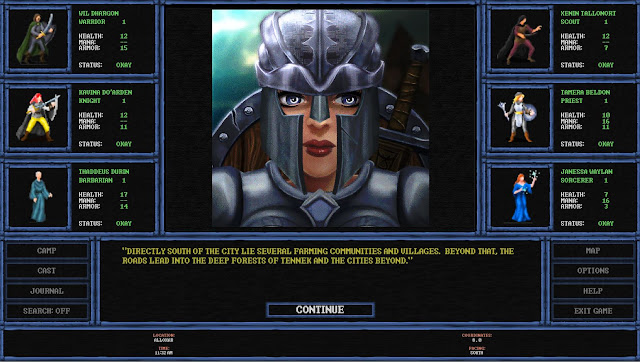 may I ask what program you are using for the game

I think I like it. Will there also be 4:3 in windowed mode available though? I find it the best of both worlds, being able to play old school games while still using the rest of my desktop for other stuff at the same time.
Favourite RPGs of all time: Wizardry 6, Ultima 7/7.2, Fallout2, Planescape Torment, Baldurs Gate 2+TOB, Jagged Alliance 2, Ravenloft: The stone prophet, Gothic 2, Realms of Arkania:Blade of destiny (not the HD version!!) and Secret of the Silver Blades.

I like it. Although I'm currently replaying Pool of Radiance with the gold box companion and the box format works fine for me as well. If you go with it I'd prefer portraits to icons I think, but I guess there's a charm to seeing the icons you use in combat as well.

Bottom line is that it's great to see you're making progress and I expect I'll enjoy it whatever you decide really. Everything about this project looks right up my street.

Here's a screenshot that shows what it looks like with portraits instead of icons: 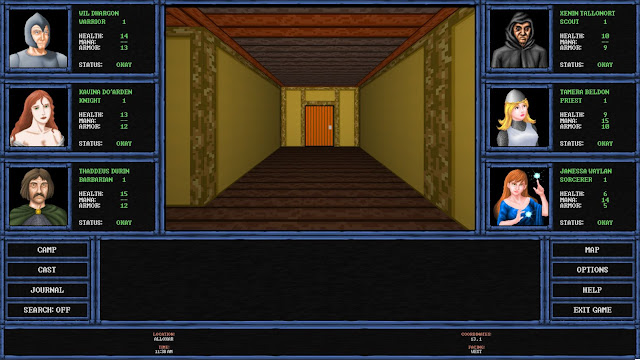 I'm still not 100% sold on this layout, though. Some of it requires changes that feel like a betrayal of the original intention of the design behind the game. For one, I wouldn't want someone to see screenshots and think it's a Wizardry clone, when it's really a love-letter to the Gold-Box games, which are completely different games.