Patch 1.80 for the Enhanced Edition of Neverwinter Nights has been released:

Lucky Day told us the most important enhancements:

Eventually it may almost be as good as NWN2. Almost.

Weapons can now have custom visual effects (in addition to the stock fire, ice, electricity, etc.)

Please refer to the new file iprp_visualfx.2da for details.

We've added (somewhat partial) support for custom spellcaster classes by "unhardcoding" a lot of the builtin constants and references.

Note that not all combinations are valid. We recommend cloning one of the existing caster classes and then start customising from there. When adding spellcasting to new classes, remember to also update existing columns.

There is also a new ruleset entry: COMPANION_LEVELS_STACK, defaulting to 0.

You can now specify LODs via a new file type ".lod". When the game loads the model mymodel.mdl, it will look up mymodel.lod. Inside that file, add the following lines:

The game supports LOD files with up to three levels, as shown above. You may omit the last entry. The first line is the high-resolution model; the other two are meant to be lower-resolution model files, that will be dynamically swapped out as the camera reaches the given distance.

Please note that LODs are highly dependent on the screen resolution of the client. The actual mechanisms here need to still be figured out; but for now, we'd suggest choosing LOD distances as if the user had a 1080p screen. To support other resolutions, there is a configuration slider in the debug settings (Ctrl-Shift-F12, select "Config", key: "graphics.lod.scale-factor") that users can influence LOD distances with.

Script call to swap out textures on the fly

A new script call was added:

// If oPC is OBJECT_INVALID, it will apply the override to all active players

// Setting sNewName to "" will clear the override and revert to original.

Changes made through this call will appear immediately on clients.

When downloading something via NWSync, disk writes now happen asynchronously while more content is downloaded. This should minimise occurrences of "Waiting On Storage". If this is giving you grief, you can turn it off in settings via the key "nwsync.transfer.flush.async".

The NWSync Downloader UI was swapped out with a new version, which is now rendered in Nuklear. It has a fancy graph and a pause button.

Finally, the Storage Manager (Options -> NWSync) now has two tabs: Servers, and Modules. Server manifests (i.e. when joining a PW that offers files) show up in the Server tab.

Modules downloaded this way will show up under "Other Modules" when clicking Singleplayer -> New Game.

// Unless custom content is used, only Wizards have spell schools

// Unless custom content is used, only Clerics have domains

// The message is displayed on top of whatever is on the screen, including UI elements

// nX, nY - coordinates of the first character to be displayed. The value is in terms

// of character 'slot' relative to the nAnchor anchor point.

// If the number is negative, it is applied from the bottom/right.

// fLife - Duration in seconds until the string disappears.

// but as it nears end of life, it will slowly blend into nRGBA2.

// nID - Optional ID of a string. If not 0, subsequent calls to PostString will

// remove the old string with the same ID, even if it's lifetime has not elapsed.

// Only positive values are allowed.

// sFont - If specified, use this custom font instead of default console font.

PERFORMANCE
Overall game performance has been improved drastically - in some cases, up by 200%. Lower bound performance should be vastly improved, especially on slower hardware.

They did a ton of work on door collisions - its pretty shocking how much work went into it.

The PostString thing is really wild. Check this out from Daztek

And here's the Texture Override, something people haven't played around with enough yet 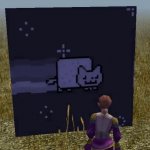 "You will find your death pleasant, but your fate unbearable." - Hionhurn the Executioner

KaosWarMonk said:
And there's this