The Darkness Below: a retro CRPG in the making

Hey!
That was certainly a delayed update but I think it was worth it.
This one marks the introduction of the game's itch.io page, as well as a proper demo!
Before listing some URLs, let me show you the usual shots of the work done: 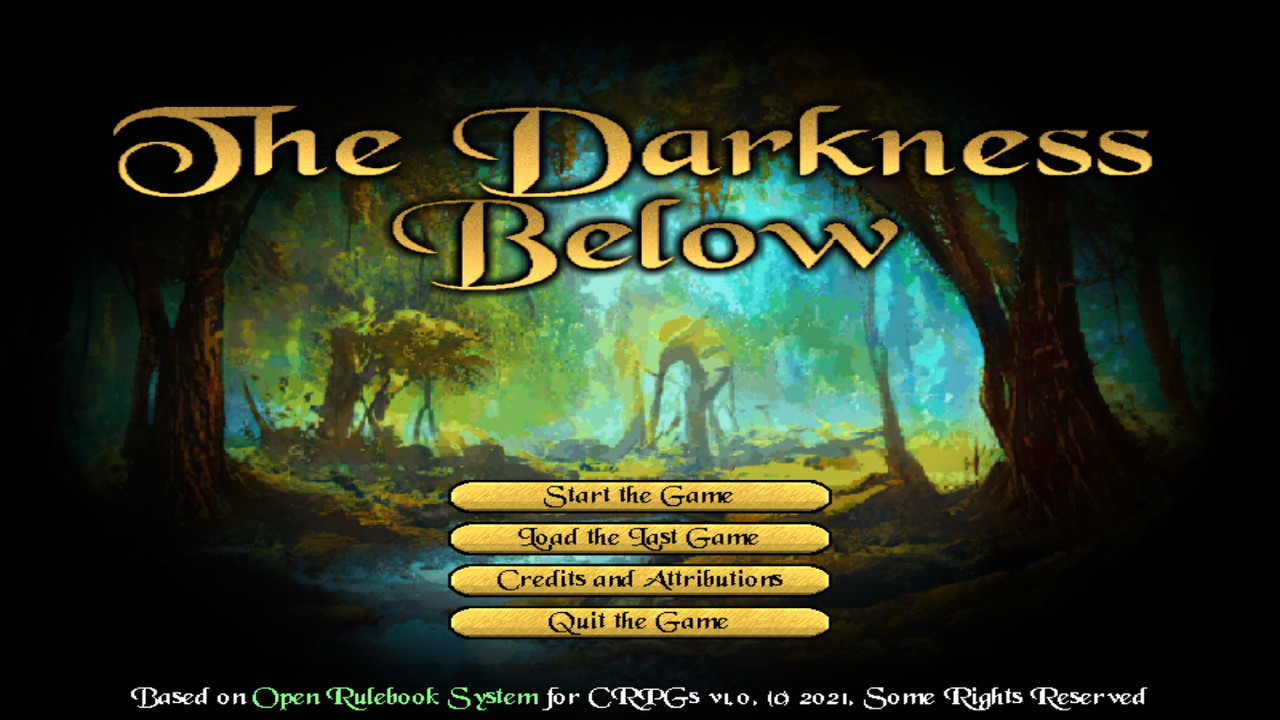 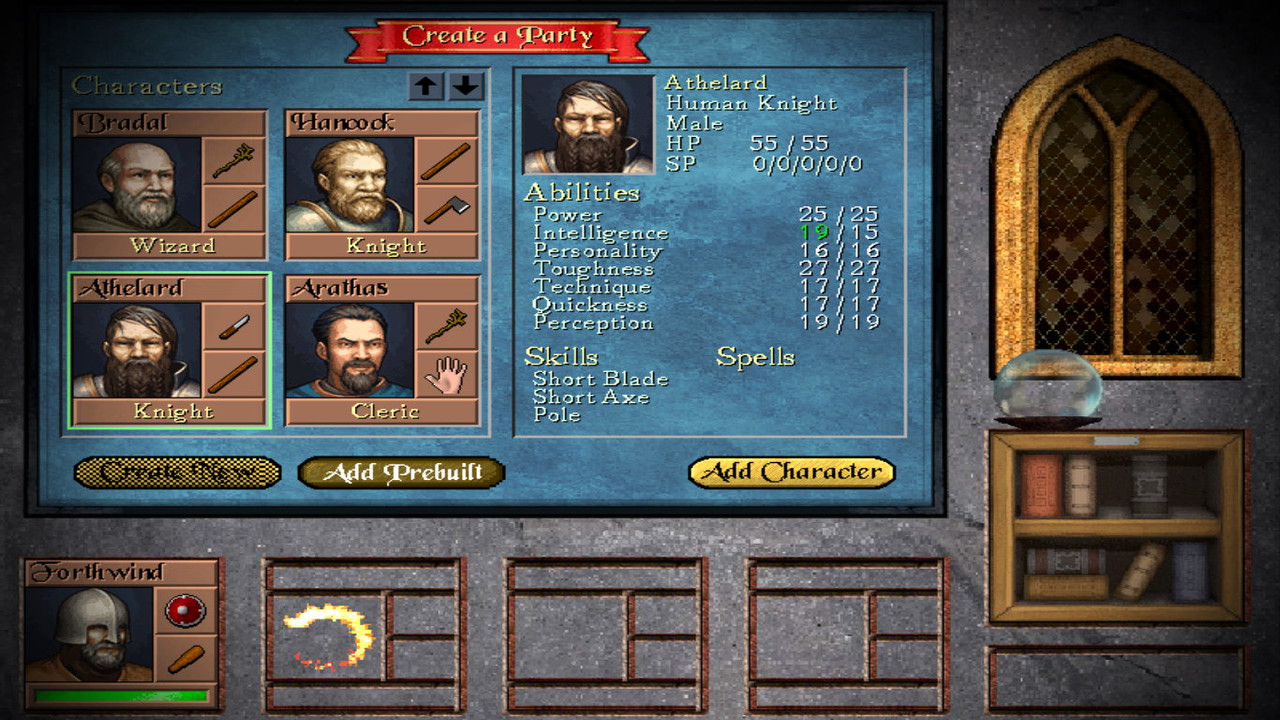 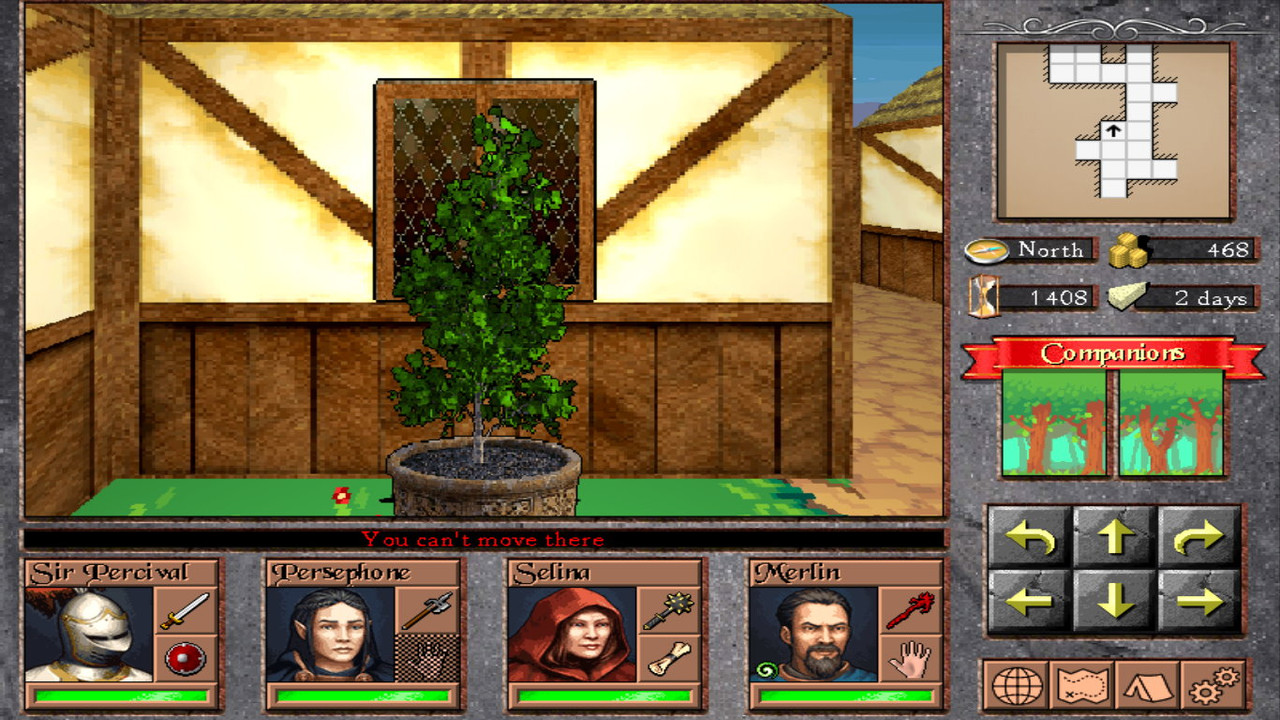 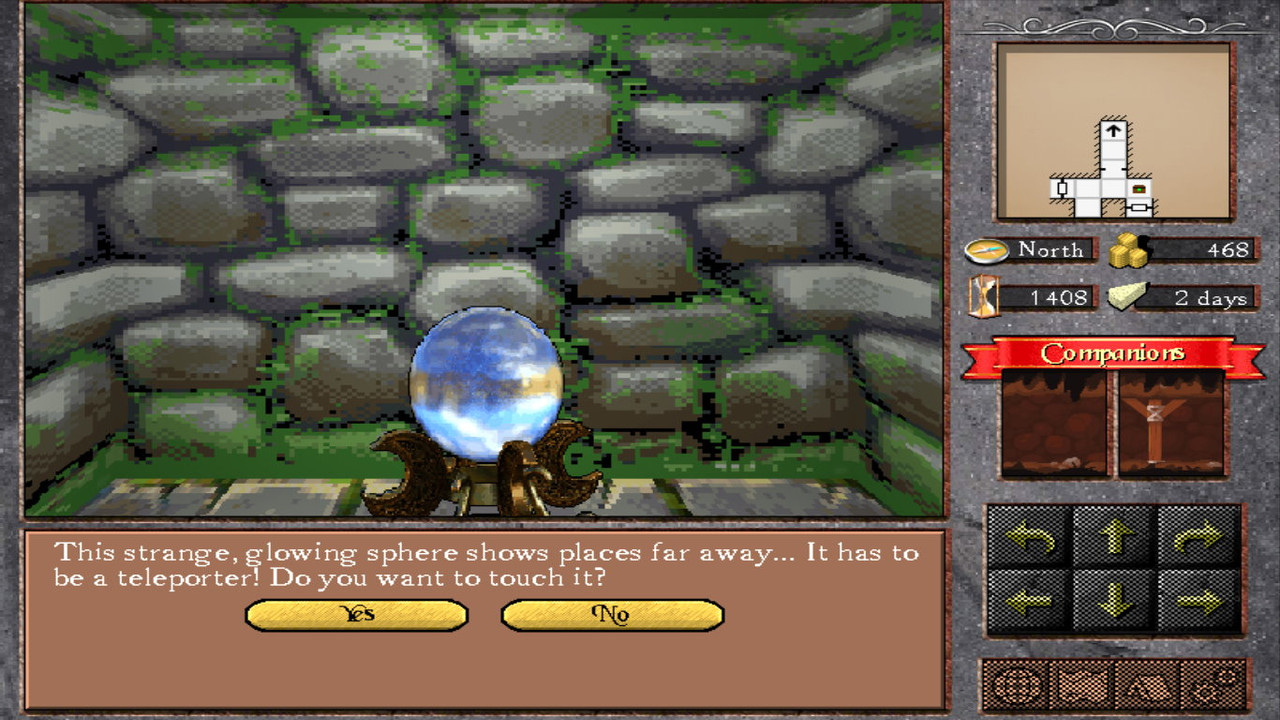 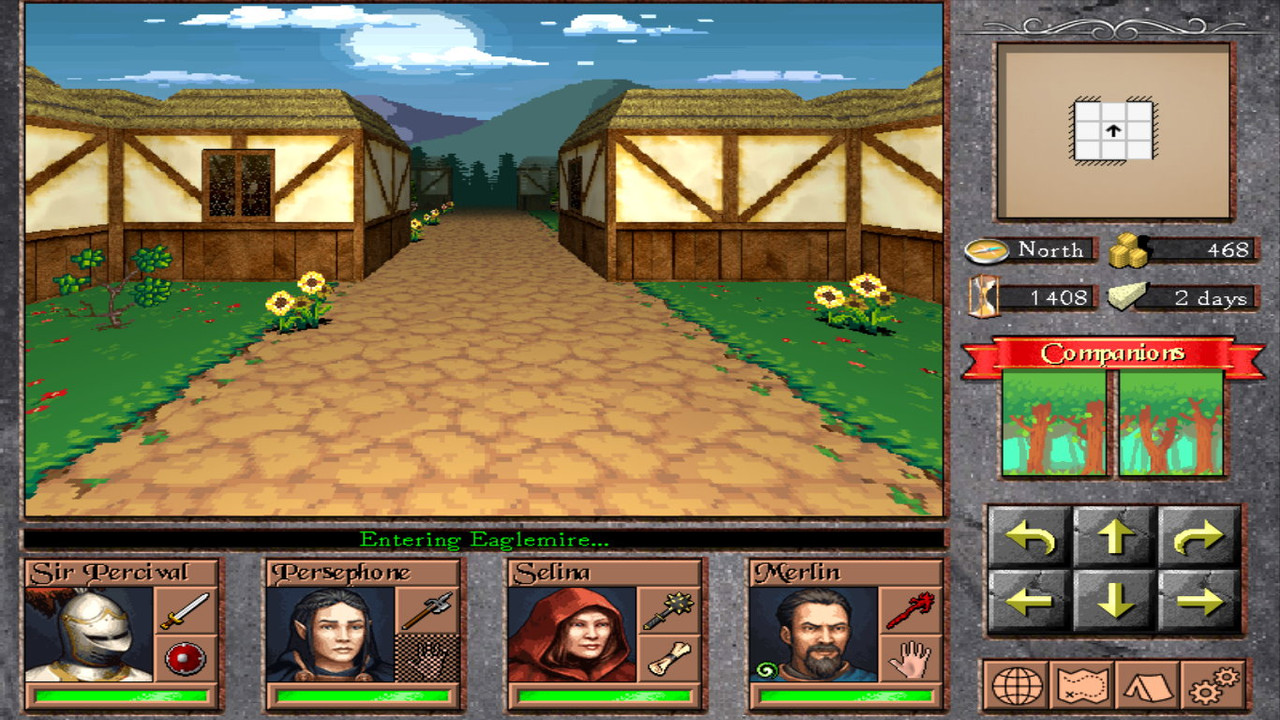 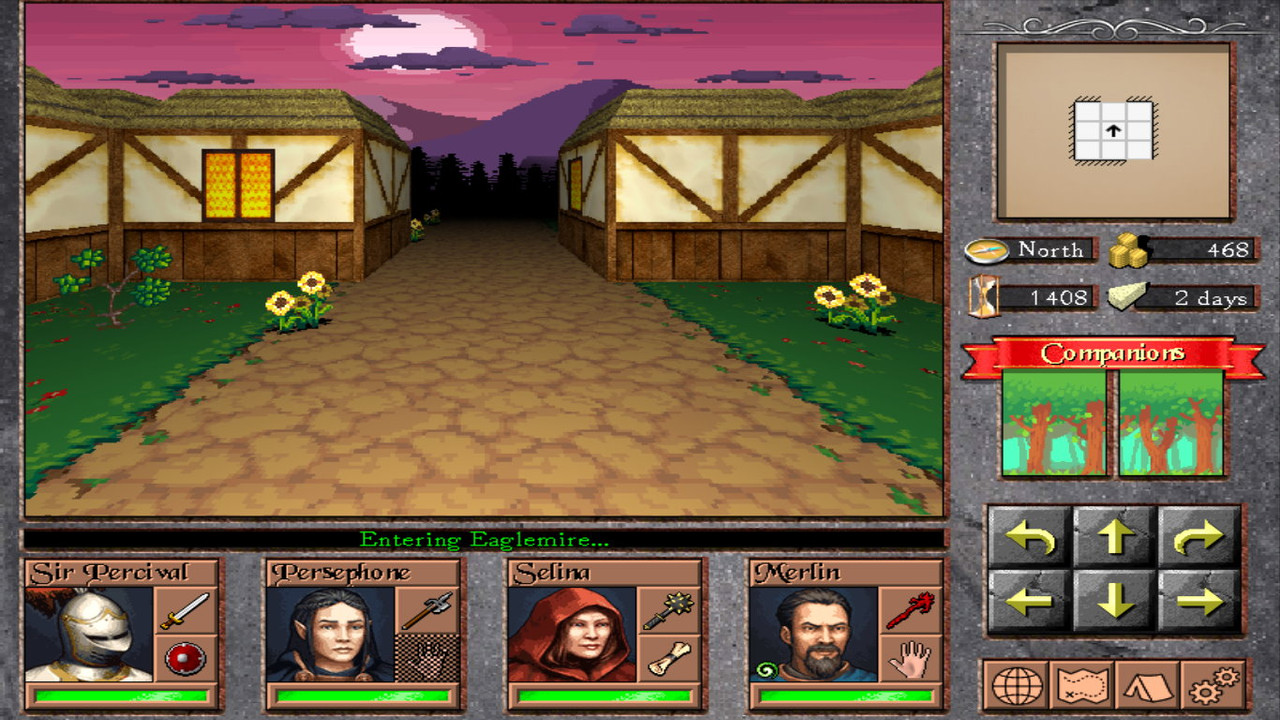 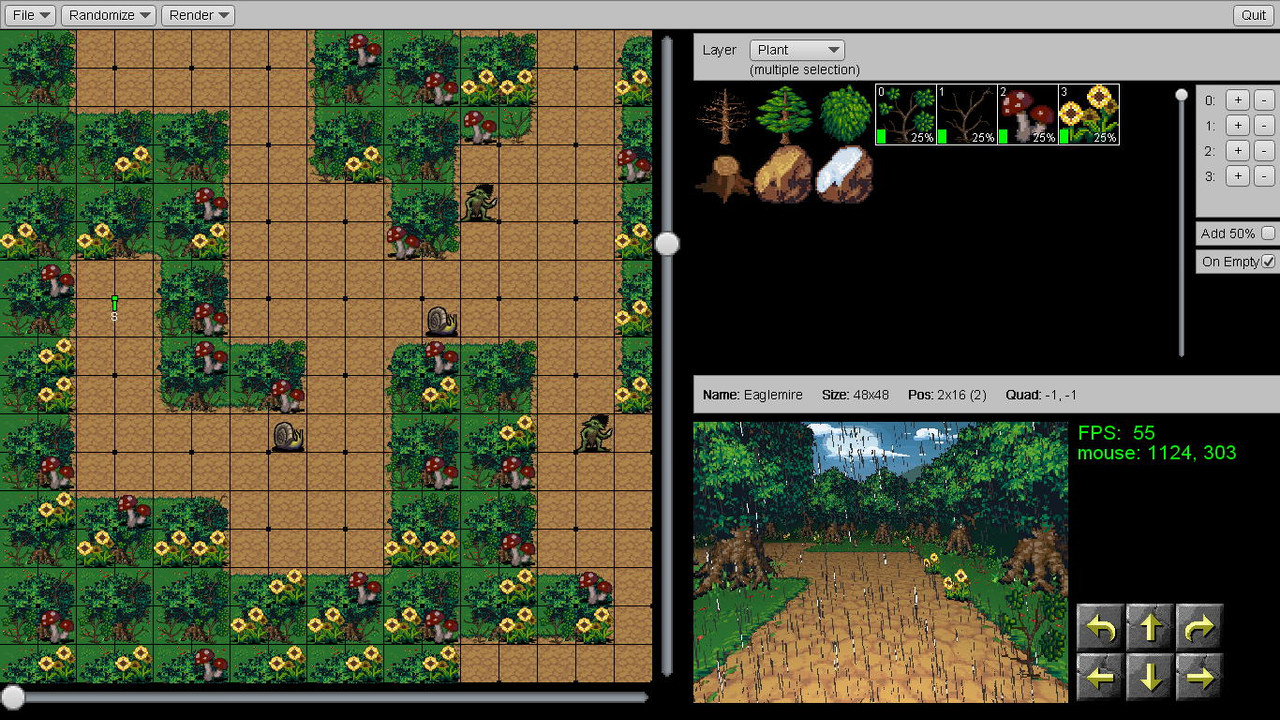 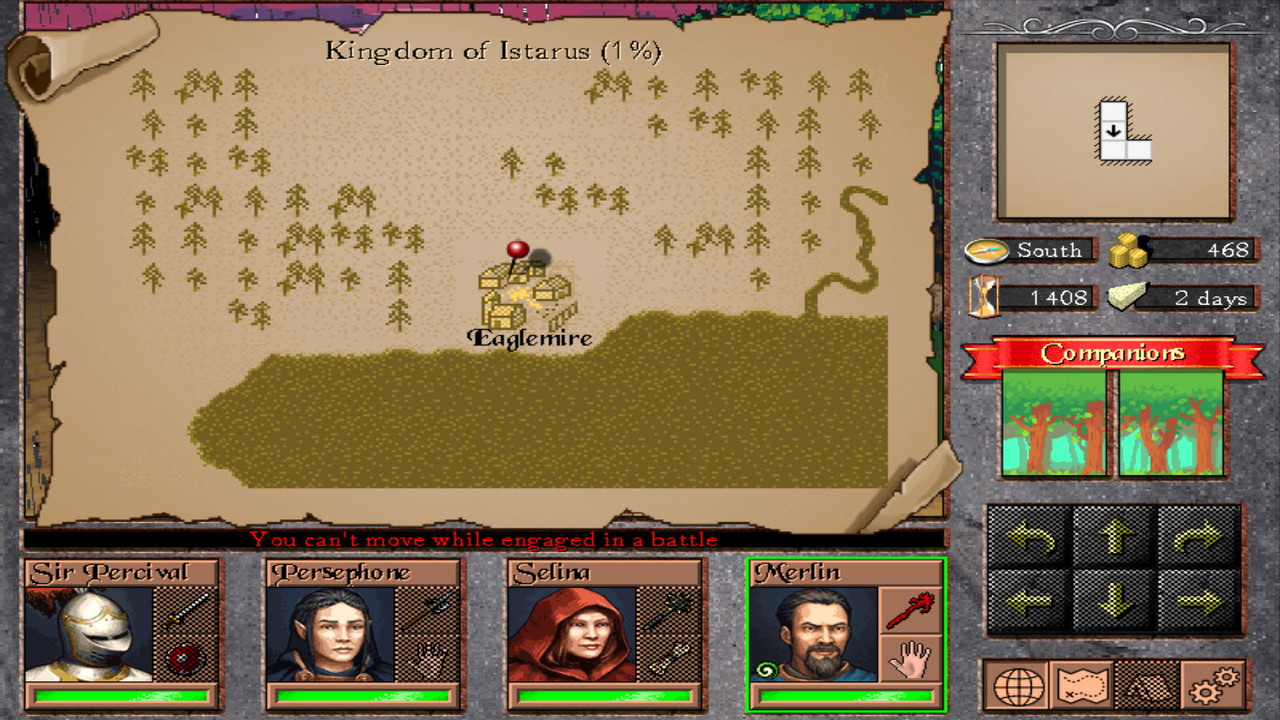 You can find the game's demo, as well as a proper 25-min video, on the following links:

Highlight of this update is the prebuilt generator, allowing random characters to be created on a New Game, following the game's rulebook. This is the quickest way to start the game and, at the moment, the only way. A proper 'Create a Party' option will be added eventually.

There's only one build for the demo at the moment (Windows), with a Linux / Android version to be added eventually. So, go ahead and give it a try
Keep in mind that the intention here is not to provide a kick-ass demo, but merely a working one. The demo's content will keep getting updated with each demo's version. The content is heavily combat oriented, with a number of events and it involves a Forest, a Town (mostly empty) and a dangerous Tomb.
Please, be gentle to this very first version! You can also find the game' Rulebook in the demo's archive, which resembles a not-that-friendly manual of sorts.
Hope you like it.
Check my Patreon

Screenshots look great!
Are you fine with people putting videos of that on youtube?
The youtube video you posted is in 480p. I guess you uploaded it in higher res but the youtube might not be done yet with processing.
Doing Let's Plays Reviews in English now. Latest Video: Mutant Meltdown
Mostly playing Indie titles, including Strategy, Tactics and Roleplaying-Games.

Kordanor said:
Screenshots look great!
Are you fine with people putting videos of that on youtube?
The youtube video you posted is in 480p. I guess you uploaded it in higher res but the youtube might not be done yet with processing.
Click to expand...

Thanx Kordanor
Yeah, I'm fine with that. Yes, I actually made the video on 854x480 (480p), not a higher resolution because the original version was taking ages to upload. It's an ok quality for now, I might upload the higher quality later.
Check my Patreon

Those shots are looking swell, I'm especially fond of the map! I look forward to giving this one a whirl.

Carnifex said:
Those shots are looking swell, I'm especially fond of the map! I look forward to giving this one a whirl.
Click to expand...

Thanx guys, glad you are liking it A working demo of the (most of) conventions is my real intention. Demo & content will keep getting updated until I feel its ready enough.
Check my Patreon

It reminds me of some of Redshift's games on Tablets and Phones, and since i bought those and liked the style it looks like you have a winner.

Hey thanx
You're referring to the beautiful "The Quest" by the Redshift.
The game plays like that, except that its a party-based game (blobber).
Check my Patreon

OMG! A spiritual successor to The Quest? Take my money. Hurry! Where do I buy this or is it only a demo so far?

Thanx man
I'm glad you're liking it so far.

It's more like a love letter to the grid-based Might & Magic series, Dungeon Master and Eye of the Beholder, with the addition of smooth movement and atmosphere of "The Quest". It blends the mechanics of a number of CRPGs. It's only a demo so far and I currently work on the second version of demo (1.1) which focuses on a number of issues / features that were requested.

When the main issues gets addressed, then I'm going to dig deep into assembling the game's world, the quests, the deep character development and stuff. I already have an enormous amount of content, just waiting to be scripted & stored in digital form. It's a lengthy procedure but the game will certainly get released this year. The hard technical part is about to end. Since the game is based on my custom engine, I had to start with technical part first.

The game will certainly end up on itch.io and I plan to add it on Steam/Gog as well.
Check my Patreon

Good, I'm a Steam guy all the way. I'll use the other services, but vastly prefer the ease of access that is Steam. I bought half a dozen copies of The Quest and passed them around here several years ago. Great game. Glad to buy your next idea.

Yup, you cannot go wrong with being compared to such games as Might and Magic, and the Quest. Throw in a few Eye of the Beholder references, and any will I had to resist is gone (had no will anyways-p).

I just had this crazy idea of putting a lot more than simple references, perhaps places, lore and even some connecting easter-egg events. Who knows what I might end up to.
Definitely a will-breaker :lol:
Thanx man!
Check my Patreon

Sorry for showing no face these months, as i had a terrible encounter with covid-19 and had to deal with lots of other crap. The development of game was paused for like 2 months, until I had to get through corona, full relocation and full job obligations.

I'm fully working on the game now, like 1 month now, although due to job obligations, the development volume is decreased a bit. I've mostly worked on game's feedback from V1 demo and you can already verify in the short GIF below that combat become speedier and I also improved the event system (monster leaving a key).

However, due to the big pause, I realized that my code base is in need of serious refactoring, removal of bloat. I had to take a break to realize this So, a lot of time is allocated on simplifying the game's code base internally, allowing more room for the increased complexity that will certainly arise during the content's production. It has to be good enough then. The work on feedback from V1 make this apparent.

Regardless, rest assured that work is continued.
The coming V2 will provide an extra level in the game's (only dungeon), with more traditional cRPG logic and more complex puzzles!
In the meantime, check the little GIF

I'm glad to know you've recovered from that damn disease.
You're doing quite a great work, keep it coming

henriquejr said:
I'm glad to know you've recovered from that damn disease.
You're doing quite a great work, keep it coming

Hey henriquejr, thanx man!!
There is a lot more work to show, usually those projects needs a good refactoring cleaning, once in a while. Fortunately, this is mostly work on feedback comments from the first demo so this is a rewarding job Glad you are liking it!
Check my Patreon

Still looking good, thanks for the update!

It took a while longer to finish the v1.1 update, since the feedback from v1.0 was both rich enough, as well as time consuming to work on.
I worked on many, many areas on this one, mostly gameplay / mechanical and less on content and heroic stories. Some of the highlights follows:

- added: configurable hotkeys for some actions; the mouse is still required
- added: implementation of a fully dynamic mechanism of D&D-like actions, allowing unique & multiple actions per monster
- added: sign posts & named labels for doors, useful for shops, guilds etc.
- added: item equipping now shows the current damage / protection the item provides to character, as a message
- added: far greater use of hotkeys on character window, switching through different character pages entirely with hotkeys
- added: now skill experience is advanced by simple use on a battle i.e. no damage is required to be dealt (weapons/spells) or receive (armor/shield)
- added: character voices per gender and type, like death, greetings etc.
- added: secondary background music on buildings, along with optional character voices.
- added: new NPCs and portraits with improved pixelart quality
- added: elemental damage caused by either characters or monsters are shown as symbols, next to damage
- added: torch can now be used as weapon as well, while providing its lighting feature. It's used like a 'club', but not additional skill is required
- added: better information given on players on items that are not equippable / usable by a character i.e. missing skills or expertises are referred when needed
- added: implementation of passive skill checks, associated with events. Events may or may not triggered, succeeded or failed, based on skills obtained by characters.
- added: 7 new skills on Misc skill group i.e. skills that can be passively checked on events such as Awareness, Persuasion, Lore and Fitness. Demo exploits some of these skills.
- added: implemented the first two (2) trainers for skills, in town! The trainer initially which of the characters meet the skill requirements and then teach them to Initiate level, for a price.
- added: a 3rd level in the "Tomb of Dark Sorcerer" dungeon, to show off most or all the fixes / additions to this update and complete the demo quest. More puzzle oriented that all prior levels.
- added: lots of item in all areas of the demo; be sure to explore / find them all, that healing potion might make a difference later.
- added: a small side quest on Eaglemire (starting map) that involves a new area and shows a new NPC; should not take more than 10 minutes
- fixed: all current background cutscenes have their own sound effects
- fixed: depleted spells for an expertise still shows pager buttons if the number of spells spans more than a page
- fixed: new games can't be created on save/load system once all save slots have been deleted
- fixed: wrong offsets on some font characters, result of mishandling the font data
- fixed: characters could use all of the starting equipped items, regardless of their features / restrictions i.e. 2-handed
- fixed: battles were quite slow due to hit/miss animations; numerous changes were made to make for an almost instant battle
- fixed: in a battle, dead characters were allowed to keep their turn under certain conditions
- fixed: discussion options with Korin in Embergrove
- fixed: improved pixelart quality on background cutscenes
- fixed: now if a party character gets multiple damaged (in a row), consequent blood effects are shown with some pixel difference
- fixed: some stats becoming negative if the character had some condition i.e. poisoned
- devel: more refactoring on codebase, allowing more flexibility and ease of use on coming content's production

Some screenshots as always: 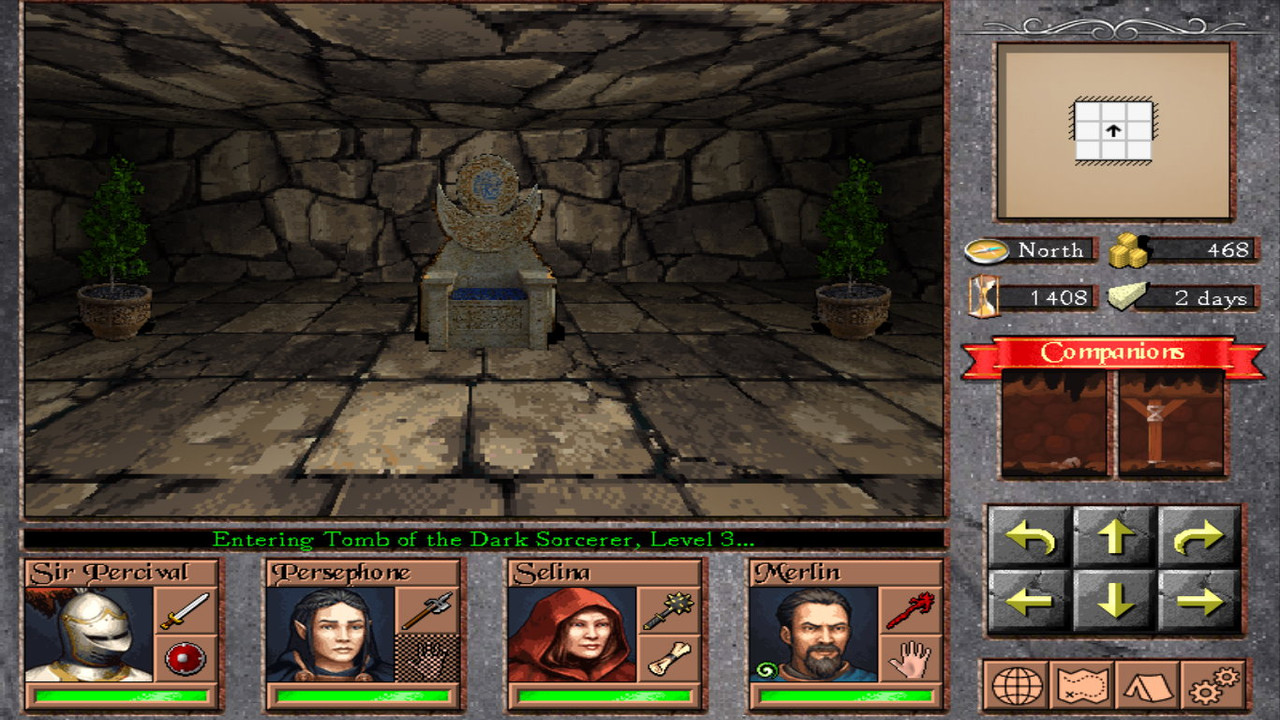 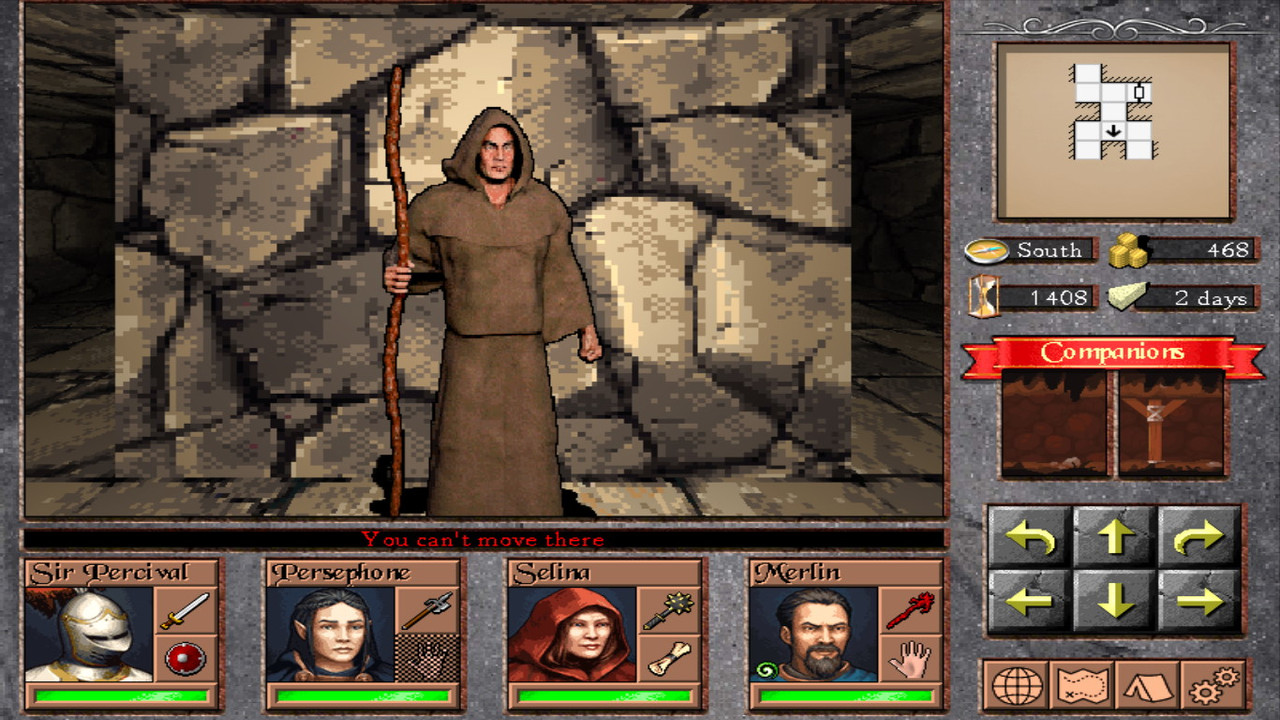 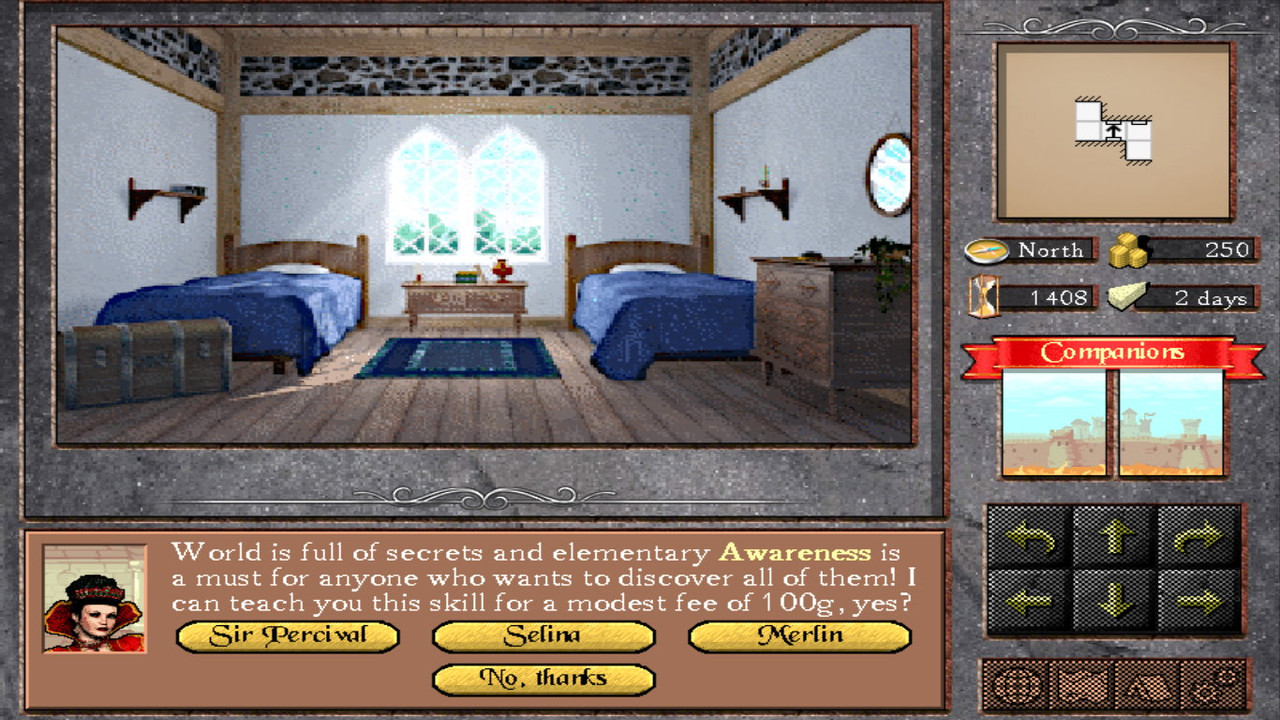 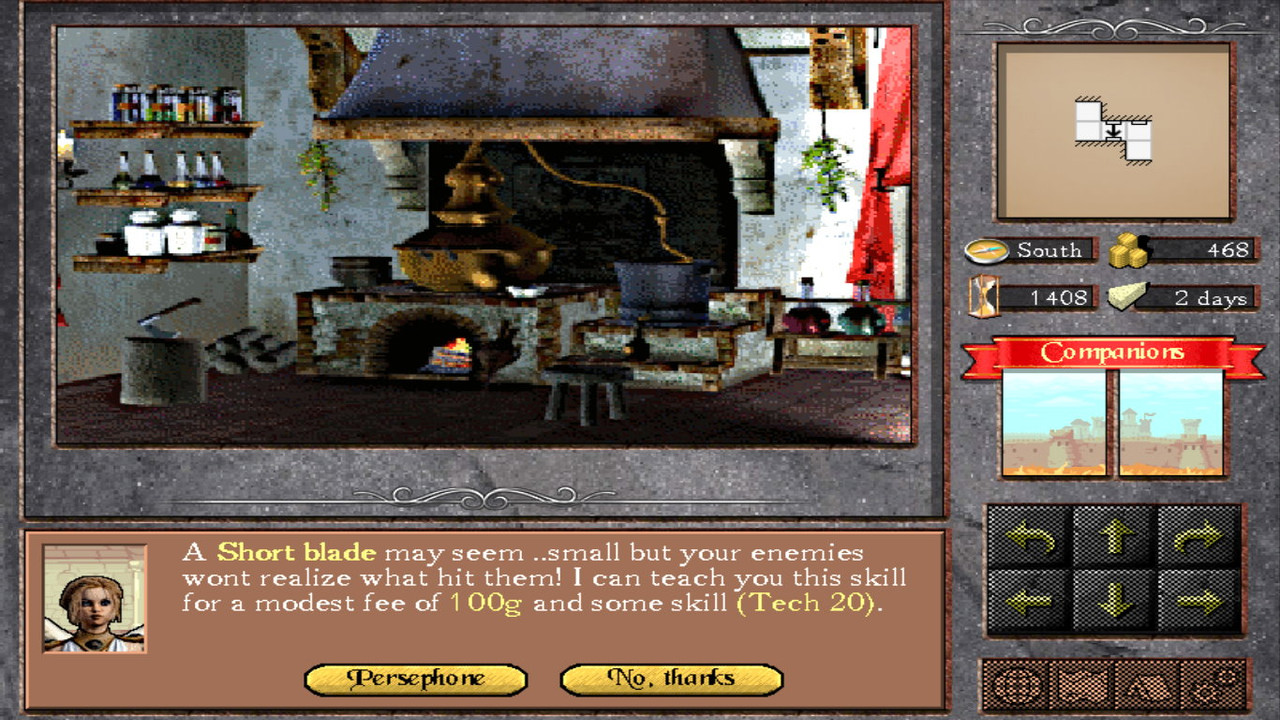 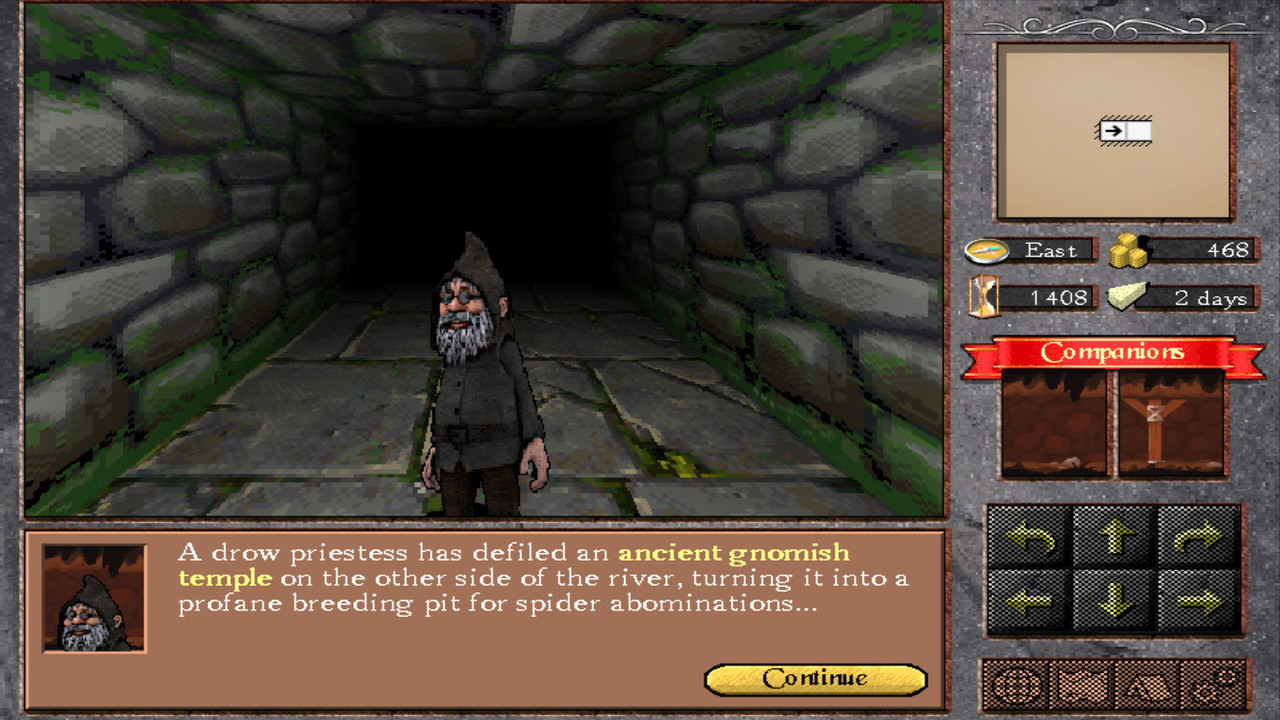 That was it for v1.1
I hope you like what you see and the changes in the gameplay and dynamics overall, which was my intention.
Many things couldn't just fit in that update, time-wise, hopefully those will come as single updates over the time.

There will probably not another demo release, as the game enters its production phase (finally!!).
ETA has messed up badly but what didn't that shitty year

Regardless, thanks , I would love to read some posts about all that!

My type of game! Looks amazing can't wait. Loved the Quest and Grimoire and Wizardry VII. Well "most" of Wizardry VII. I could kill anything the game could conceive but the puzzles.. not so much.
"For Innos!"