I stopped watching the Walking Dead some years ago, don't miss it at all. Similar to other shows I could name, it started off well but quickly dove off the nearest cliff.

The comic book, however, I still read, and will right up to the last issue.

Thou hast lost an eighth!

vurt said:
It kind of gets a 10/10 automagically since nothing else exists to compare it to unless you start making rather.. odd comparisons, to other (quite different) subgenres in fantasy, to TV series as a whole perhaps - which can be fair or not at all, it would depend on a number of factors.
Click to expand...

Well, that's my point tho. Putting GoT next to the best of the best regardless of genre used to feel like a perfectly fair comparison. No longer.
"But if it's a battle," he said, "which side is which?"
"If it's a battle," said Lilac.

...it'll all turn around nicely in the next episode guys 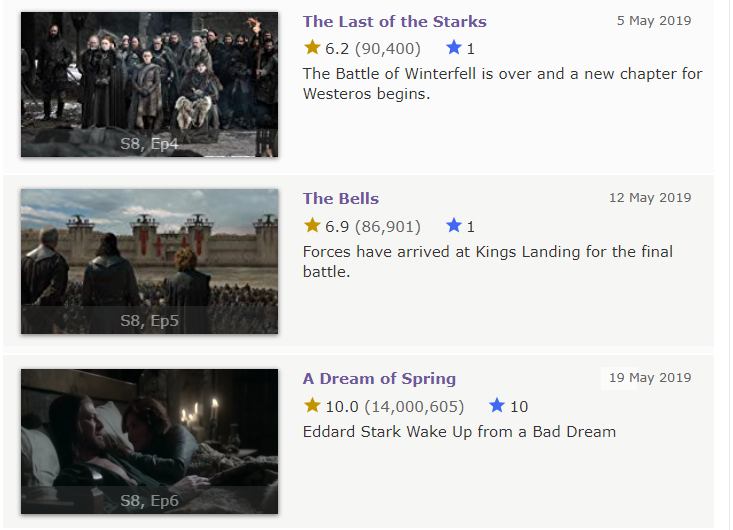 The only true redemption in my eyes would be if the Scion leaps up, tears every living Stark apart with his bare hands, then goes on to slaughter everything to the south. I put the odds on that happening at roughly the same chance of me winning the next lottery, and I don't play lotteries.

I initially thought Sansa would sit the throne in the end, therefore maintaining the balance that has existed in Westeros for the past several centuries. I'll amend that now, in addition to her I also think Bran might be forced to take the throne, simply to maintain peace in all the realms. In the final solution, it will be someone that truly doesn't want it, that's why I thought it would be the ancient deceased Stark before any other.

Man with the hat

For me GoT is a dark fantasy spectacle like no other. It is just fun, sexy, violent and thrilling to watch.

Sure the early seasons had different feel and I get that the idea was to deliver more grounded fantasy drama, but I rather enjoy it for what it is rather than go nitpicking every small detail of each episode and plot hole and grind my teeth… So yeah I've enjoyed every GoT episode more or less. This last one wasn't an exception.


Dany going batshit insane and mass murdering entire city… Well that was sure something, wasn't it? I honestly expected her to turn out better than her brother, but this show never stops surprising.
Can't wait the finale!

vurt said:
Of course they are in the same genre, never said they weren't
Click to expand...

Well, to be fair, that's exactly what you said.


vurt said:
Comparing it to Xena or Harry Potter or whatever would be very strange since it's not really the same genre at all.
Click to expand...

I was just responding to JDR's point about the comparison to other fantasy shows, which doesn't seem an unreasonable question, to me. I don't actually think the comparison between say Harry Potter and GoT would be so strange. Both being fantasy epics, they have a great deal of fundamental similarities, as well as significant differences in tone and maturity. I also don't think works in the same genre exist on a linear spectrum, being at different "ends". I think one work differs from another on multiple axis, and it's not as simple as that.
"I cannot define the real problem, therefore I suspect there's no real problem, but I'm not sure there's no real problem."
Richard Feynman

JDR13 said:
I thought this past season of TWD had a few decent episodes, but in general the show has been shite for quite a while. I agree they need to stick a fork in it.

It's a shame because it really was a great show at one time.
Click to expand...

It would likely still be a good show had Darabont stuck around. Not sure why he didn't but the show certainly suffered.

Also there appeared to be an explosive character to the dragons fire breath. Is that a result of Drogon being fully mature?????? Pen and Paper folks response welcome.

I think some of the extra explosions seen in the fight for King's Landing might be due to the reservoirs of alchemic wild fire left in depots in various parts of the city. Honestly, considering what happened to the other dragon in the previous episode, I was fully expecting some ten year old urchin to slay the remaining dragon with a slingshot or well thrown rock.

Regarding Game of Thrones, I gotta agree with the sentiment that it has gone downhill in the past 2-3 seasons, the fact they didn't have the books to fall back on anymore being very noticable.
Especially this season does very much feel like a checklist they're going through, checking off major events and getting them out of the way in the limited amount of screen time they have. It feels "rushed", and going from scene to scene is sometimes incredibly jarring.


Dany going batshit and murdering everyone in King's Landing was pretty epic though.

Carnifex said:
The only true redemption in my eyes would be if the Scion leaps up …
Click to expand...

Alright, I gotta ask: what is this "Scion" stuff you keep spouting about? I read the books (it's been a while though) but I have no clue what you're going on about.
Exitus acta probat.

With nothing more than plot points from Martin for the last few seasons, this was the expected outcome. Still enjoying it though.

The Scion is the former member of house Stark, that thing that got obliterated by Arya this season. I call him scion because there is a great chance he used to be a Stark, but since the family removed his actual name from all known records, it's not certain who he might have been in the past. Night King just seems the lamest name of all time for such a potent force.....well, perhaps not so potent, as it turns out.

Half a million people demand a remake of season 8. Lol.

Haha, you better get superior writers to do it this time around! Hard to believe given the extra time for this series, and this was what they delivered. I blame HBO as well, they should really know better.

I've said it before it's not just the HBO writers fault.
"Opinions are like assholes. Everybody's got one and everybody thinks everybody else's stinks."

I've said it before it's not just the HBO writers fault.
Click to expand...

She's always been really twisted so it shouldn't be a surprise to anyone (the viewers knows a little more about it than the characters's surrounding her who hasn't seen those darker sides)
Latest creations: Fallout NV: A Wasteland in Bloom / Fallout NV: WFO v3.5