Impressive, good luck with the campaign! Looks like a very good start

Hello! What a week! We are 55+ % funded.
I posted in-depth updates on some features I thought you'd like.

Few more updates to share with you!
About your homebase fort
About crafting

Without some sort of futuristic storyteller AI's, that can spin the tales in real-time and populate the game with cinematics, simulated voice acting and build new game maps in an instant. The C&C of video games will be a limited experience. There is only so much handcrafted content you can have in a game, and there is a limit to how long procedural stories can keep their impact.

But within these limitations, it's possible to create engaging C&C stories that add to replay value and make your experience more personal.


So, what makes choices good and interesting? We believe the choices work best when they let you achieve your overarching plans and explore the personality of your character. Help to build relationships with other characters and challenge you with interesting dilemmas.


And they are at their worst when you are ambushed by unexpected choices with vague implications on their outcomes. That leave you confused and frustrated over being forced into picking between good old "bad & worse".


We try to include what we believe to be good values of C&C into the choices we design.

When we iterate over our quest we ask ourselves.

Are you able to have agency over your story? Can you make your own plans and follow your own goals?

We try to design quests and gameplay in a way that clearly introduces you to the dilemmas and problems at hand. And after that gives you freedom and options to solve those dilemmas the way you see fit.


Almost every problem the player faces will have multiple solutions. Some tied to players' reputation or skills, some to previous choices, and others can be discovered through deeper exploration. There are many degrees to failure or success and there are no â€œwrongâ€� choices.


Are you already invested enough into the world to care about the choice you make?

With our day passage system and personal stories for each NPC, you will get to know each character and faction very well over the course of the game. Choices you make will affect them deeply, and you will get to experience many consequences during your playthrough rather than only at the end of the story.

Does the dilemma make sense? Does it resonate with you?

We chose to focus the story on character conflicts and make their problems grounded in the reality of the setting. This way we get more opportunities to focus dilemma on things that feel relevant and real to the world you are exploring. Things that have more chances to make you really think about how you and your RP character would approach such problems.

Are you able to make an impact on and share meaningful experiences with characters you care about?

Listening to exciting character backgrounds can be fun, but if you don't get to experience similar stories with those characters during gameplay it sometimes can feel like their best stories happened without you. We focused on exploring characters through shared experiences with players, rather than their past.


There are many more considerations that go into C&C, and we'll explore them in future updates and quest design live-streams.

Shamans
Why we chose prehistoric setting

When Thein younglings come of age. They are measured and judged by their abilities by the Tribe elders. Some are chosen to be craftsmen, artisans of different trades. Rare few children will be adopted by the shamans. Most become Earthbound, lowest caste among the Thein, destined for the most menial of labors.


And the castle most of the Thein children aspire to join are the warriors of the tribe. Those who survive the brutal training seek out and bond with other warriors to form small battle groups they call packs.


Packs are bonded for life. If too many of the pack fall in battle, the survivors are expected to travel back to their village and take an honored place as battle masters and teachers of the young.


This is a sacred duty of each warrior and can be broken only in one circumstance. When the gathering of Thein tribes marches to war, the “orphaned” packs, who have too few warriors to hold together, might “adopt” other such warriors into their pack and continue to fight for the Thein people.


You can recruit characters into your pack, your party, and they will fight by your side and aid you in exploring the dangerous world of The Way of Wrath.


You can form bonds and friendships, or rivalries with your companions. And some you can even romance.


Here are some of the characters you can “adopt” into your pack. 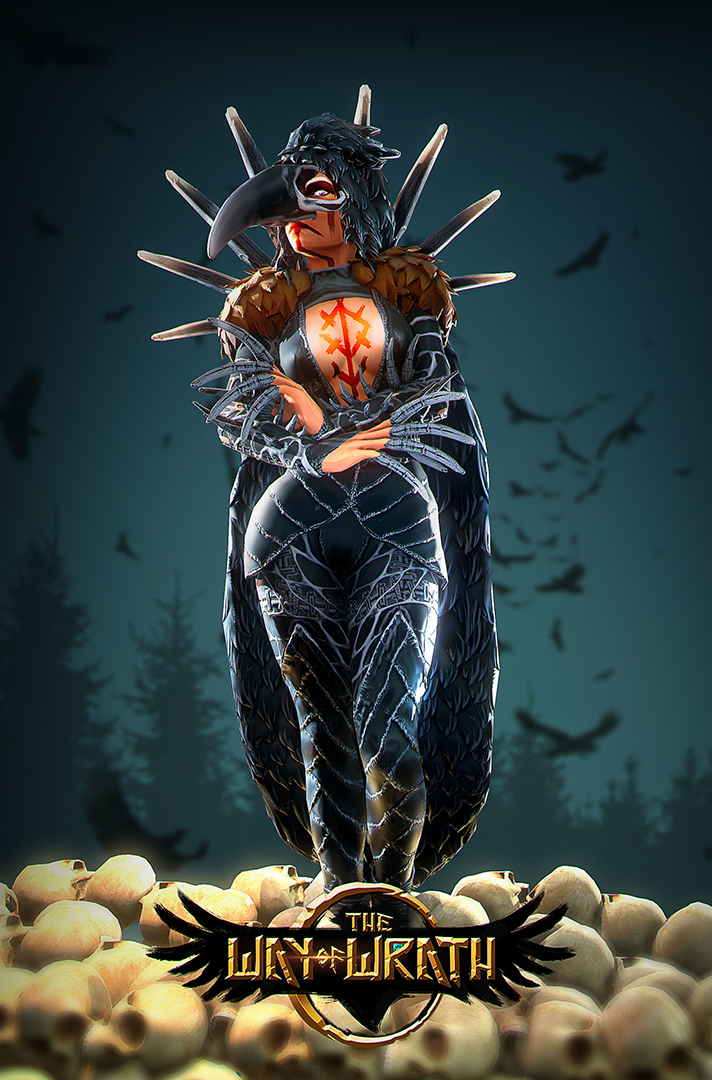 “I’m Eshma. Wretched outcast, ill omen in the flesh. Bringer of bad luck. Let me fight by your side and I will burn, hack and grind your enemies into the dust. ”

An orphan of war, Nuria was adopted into a group of enigmatic renegade shamans called Eshma. Molded into a fearsome tool of war Nuria wreaks terror on the battlefield with her terrifying shaman powers.

After the Thein war was lost, Nuria had fallen out with her Eshma sisters, and she is now looking for new allies. Those who dare risk the wrath of Thein Skybound shamans by joining cause with Eshma will find Nuria to be a powerful and loyal ally.

The newfound freedom from the cause of the Eshma, has forced Nuria to question her role in the world.

Tygrid
Few are who have faced the savage fury of the primal predators and lived to tell the tale. Tygrid has made a life out of it.

His experience has kept many a young Thein hunter from ending up in the belly of the fearsome beasts. But you’ll never hear the hunter boast of his feats. Reserved, quiet, and contemplative, Tygrid feels more at home within the noble simplicity of wild nature, than amidst endless machinations of his own kind.

His habit of always telling the truth has put Tygrid at odds with many of the Tribesmen. And his love of questioning the nature of life and the universe has forced quite a few Thein to drown out the existential dread caused by his questions with some hard alcohol.

In battle, Tygrid fights with berserk savagery and cunning of the wild beasts.


Nemme
For as long as you remember Nemme has been there with you. Through countless battles and perils, she'd been one constant you could rely on.

Wild, reckless, and adventurous in her youth, Nemme has changed greatly after her daughter Saya was born. By Thein law, she should have given up her child to the Tribes, to be raised in the safety of the villages. But not even the council of elders and shamans could separate her from her child.

You watched her raise Saya through all the horrors of the ten-year war. Tearing through anything and anyone who threatened you or her daughter. 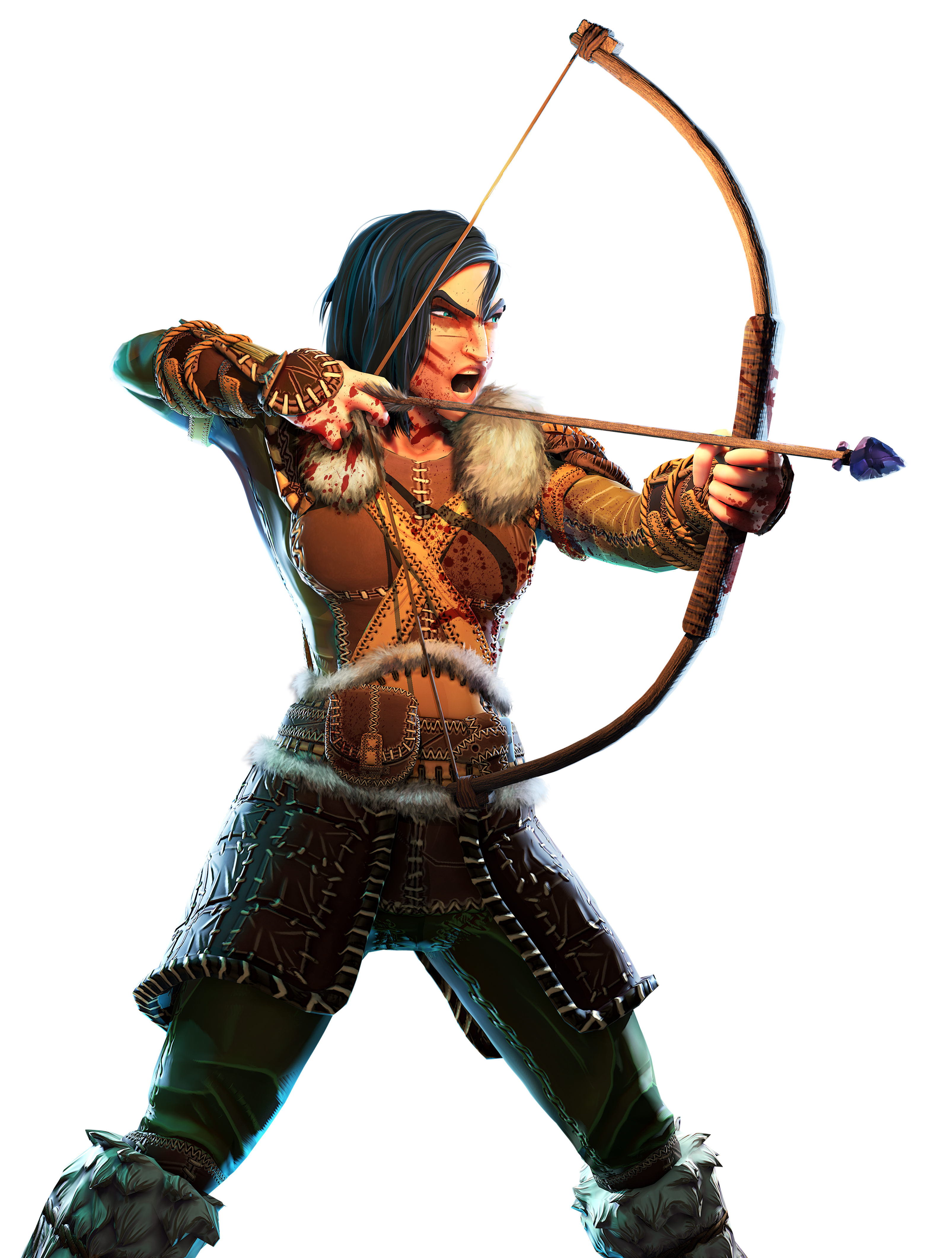 Nabo Z’vara
Few people would choose a climax of the ten-year war as a prime time to get on top of a donkey and venture into a site of the impending massacre on a quest to chart the first map of the impenetrable northern wastes. Nabo Z’vara is one of those people.

Shrewd negotiator, accomplished trader, and a well-traveled man of the world. Nabo owes allegiance to no one but his own grand ambition to immortalize his name and legacy.

Nabo’s experience and cunning will be a true asset to your cause. As long as you can bring yourself to trust the sneaky bastard. 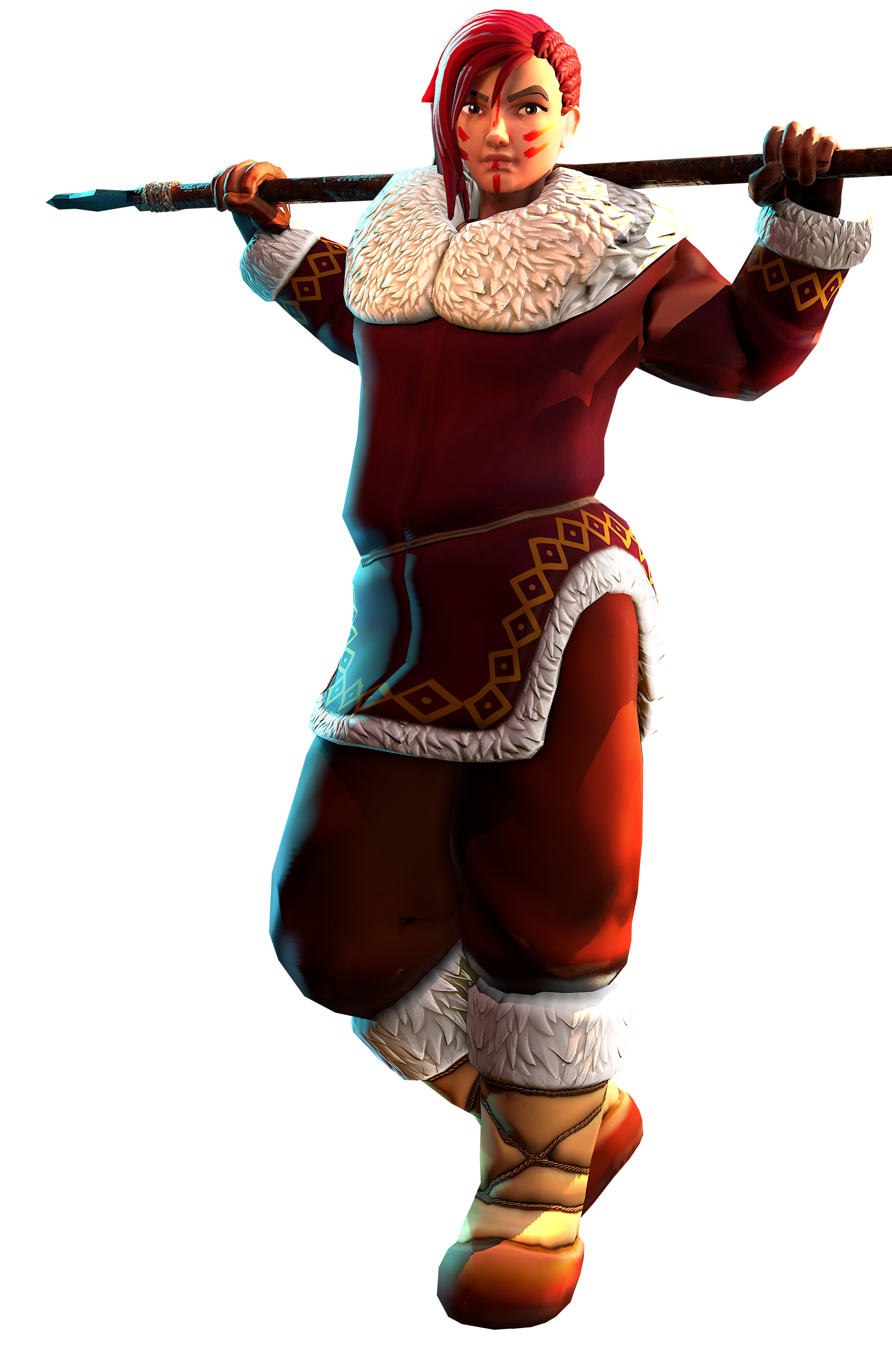 Young, fiercely inquisitive, and roguishly cunning Samaya was born in a world too small for her wild imagination.

She inherited all the survival skills and traditions of her tribe and pushed them to new heights with her inventions. You will find no one better to guide you through the countless dangers of the White Grave valley.

Ever in conflict with the strict traditions of her village, Samaya is more than eager to join the free-spirited Thein and she’ll make for a valuable ally and companion. As long as you maintain her rather loose standards of code of conduct. Or as she likes to put it: “Don’t be a ****, and you’ll do fine by me.” 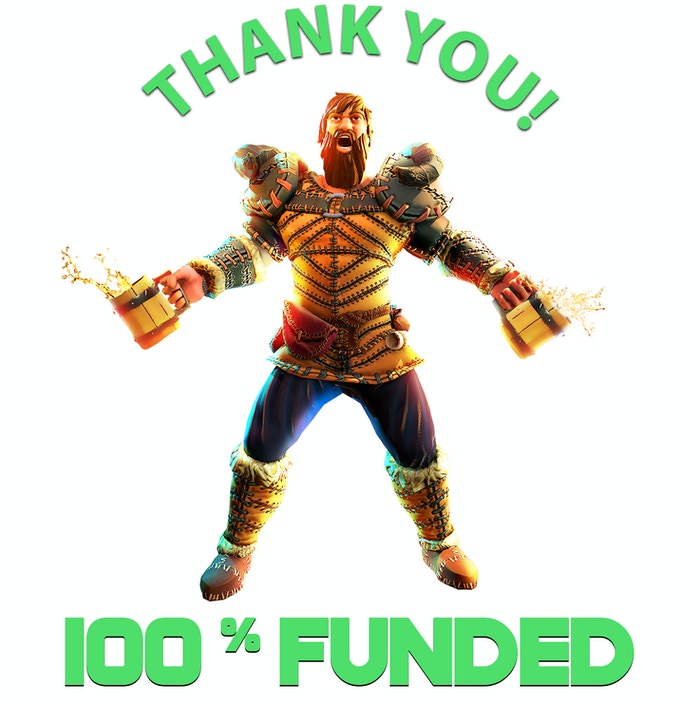 Now that the project base goal is funded all additional funds will go towards stretch goals. Our first stretch goals are Real Time with Pause combat addition and Nintendo Switch release.

Hi! 4 days left till the Grand Finale! Our campaign is now 115% funded and we are fighting now for Real-Time with Pause Combat, Pets, and Nintendo Switch release stretchgoal.

And we have Art contest and discount on our epic tiers! (Do you want to be a Mythic?)


And also some more updates:
Bones, Leather and Obsidian. Equipment Design
How do we approach Open World design principles
Our unique take on NPC stories

Hey!
I just wanted to say we are in our last 8 hours of our Kickstarter campaign!

We are 145% funded and less than €1600 away from Real-Time with Pause stretch goal. (Which also bring Turn-based version improvements)

If you want to join in there is still time! We got a special price on the game, physical editions, collectors, early game access, and even epic tiers like quest design or lifetime cameo in the setting.

Anyway, thanks for your attention and support. And here is a free wallpaper for you. Cheers! 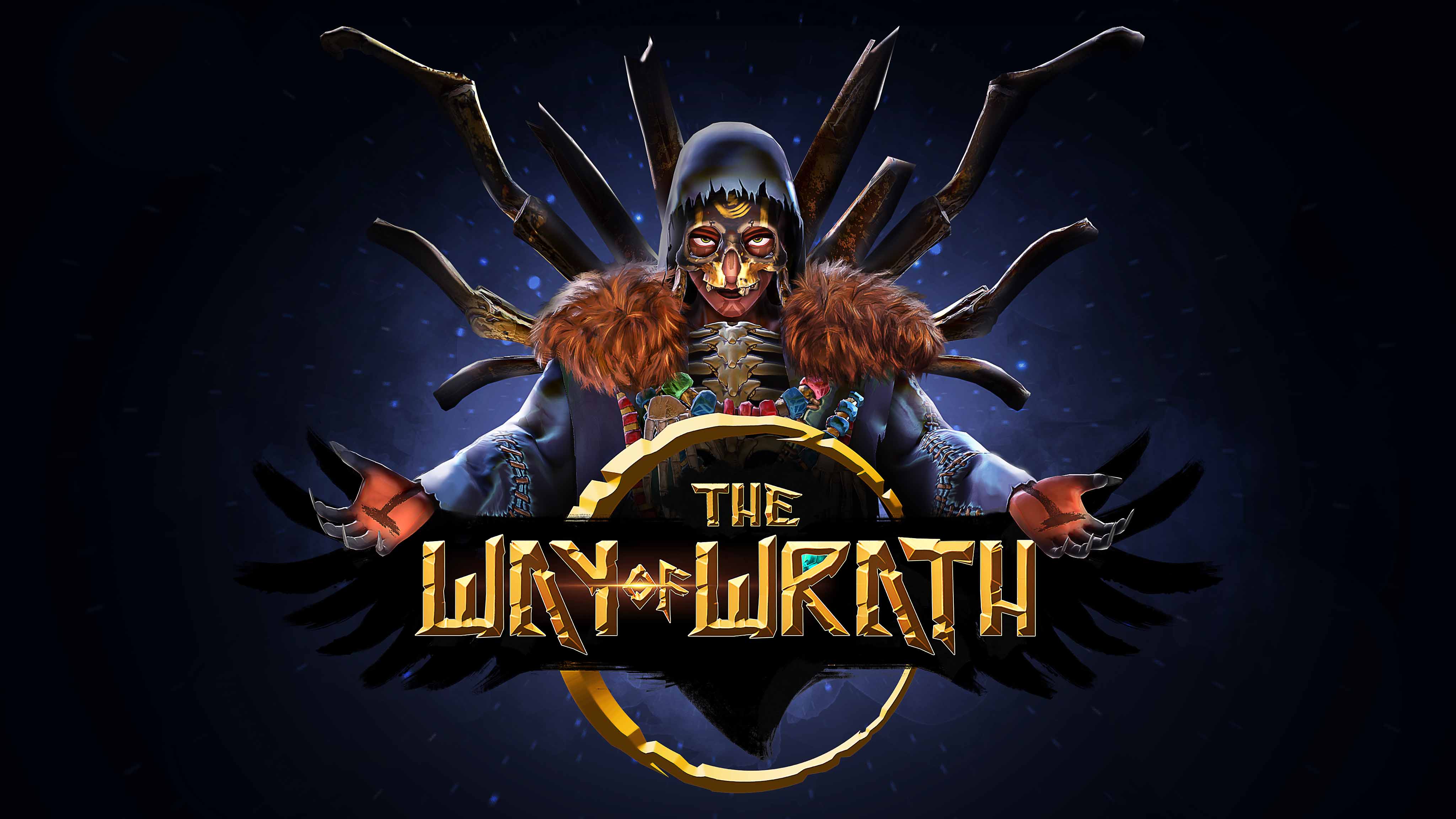 Greetings and Salutations!
I've got a new gameplay trailer to share with you.

And more stuff in our update