I finished watching both seasons of the Netflix Witcher series for the second time. I'm sharing some thoughts of it here (I had to open a new thread because I did not find an existing one this could have fitted to). This is bound to contain spoilers.

My background with The Witcher

I am a fan of the IP: I played the second game about a decade ago and fell in love with the setting. Read the books, played the first game, replayed the second, and was thoroughly hyped for the third game. It did not disappoint and still is my favorite game of all time. That said, I am not a film expert, and read the books around 2014-15, so I may not remember everything correctly.

General cast, setting, and quality of the Witcher TV series

Initially, the series stroke me us cheesy, cheap, high fantasy. The grittiness I perceived from the books and games was replaced by excessive use of make-up and the typical bloodiness and cruelty of contemporary streaming company-made TV shows. Ciri and Gerald seem to be in full TV make-up pretty much all the time, even when supposed to be dirty. Even before the sorceresses (Triss/Yen) taught Ciri how to use make-up. Clothes look silky smooth even though the characters are emerging from sewers. Gerald's clothes look trendy and brand new even though characters comment he needs new ones. Elves are as gay as they tend to be in generic high fantasy. Some action-kissy fighting scenes are rather embarrassing. Woods are economic tree-fields treated with modern forestry machines typical for the Western countries and far from primeval fantasy forests - even in places where there are not supposed to be settlements of peasants close by (Kaer Morhen, for example).

All in all, they could have done a better job with the visuals, including make-up, costumes, staging, set pieces, and some writing. That said, the actors are generally doing a good job. Further, music as a storytelling element is on the level we got used to in the Witcher 3. Despite sounding negative, I could not stop watching the series on the first watch-through and finished it almost in one sitting.

The storytelling is excellent in some episodes. Especially the first episode of the second season was close to a masterpiece capturing the atmosphere, which made me love the IP. Unfortunately, such masterpiece episodes are surrounded by rather mediocre ones. They are not bad but tend to jump back and forth in too many places without capturing the atmosphere and setting, separating the IP from other fantasy. The second season is somewhat better in this regard, as the first season tried to cram too much. However, part of the blame goes to Sapkowski, as the books also jumped back and forth and were often far from stellar. The Witcher IP, including the books and games, tends to be an uneven experience ranging from among the best in the genre to some low cheesy generic fantasy. The TV series does not appear to be an exception. Nevertheless, the music as a storytelling element and tiny things that one tends to overlook while watching the first time are high quality. All in all, an enjoyable experience.

The TV series seems to sometimes follow the plot in Sapkowski books, often deviating from it. I understand that some deviations are done to save time or incorporate something that did not fit in otherwise, while there are no obvious benefits for many others.


Why is Yen suddenly a swordmaster (the dragon episode)? Why would she lose her power only to demonstrate mental strength, egoism, and betrayal? That changes her character entirely. Many other chances make the setting more black and white than it was in the books or in the games, or they just eat the complexity of the characters.
Anyway, the charm of the IP does not come from the story, which is mediocre at the best, but from the atmosphere, setting and especially from the characters.

As said, the characters are a central part of the IP. None of them is perfect. Everyone has their own partly egoistic agenda. They are easy to relate to, and there are some strong female characters uncommon in the male-author-driven fantasy genre.

My personal favorite of all characters in the Witcher is Yennefer, who still is the best character in the TV series - and the biggest let-down. She is the raging egoist with low self-esteem Jaskier/Dandelion readily describes her and has not had time to grow up due to responsibility for Ciri. Avoiding further spoilers, the modifications of the story from the books seem especially go against Yen's character. It is a pity because the filmmakers had one of the strongest female characters in fantasy in their hands. They screwed up using the potential. If they make the third season, perhaps we will see Yen's less self-centered and more heroic sides. However, it is possible that I just remember wrong because CDPR did so stellar job spicing up Yen's character.

The filmmakers and the actor did a decent job with Gerald. He is portrayed rather faithfully. Although Gerald's stubbornness and partial idiotism are mentioned mainly by his friends but not shown very well, apart from some occasional scenes with Yen and Jaskier. He was not portrayed that way in the books as far as I can remember. Instead, he is the hero every TV-fantasy story is looking for.

While Ciri was a dull, generic character in the books, the filmmakers have managed to blow some life into her. She seems exceptionally social, which I do not remember from the books, and stubborn, definitely in the books. Jaskier/Dandelion is also quite well made, although he does not get laid nearly as often as in the books. Also, as far as I can remember, he was portrayed as more equal to Gerald in the books than in the TV series. In the TV series, he lacks depth and is just a classic jester and a storyteller. Triss is another let-down. Sure, she was eventually spiced up by CDPR, but I remember her being slightly more egoistic in the books. She is just a freaky, kind sorcerer with no apparent personal agenda. That's not the Sapkowski way to portray sorceresses.

If you haven't seen the series and have access to Netflix, it's worth a watch. It's pretty entertaining. If you do not have access and are not a fan of the IP, there are probably other things you like to do more. As a fan of the IP, more content is always better, even if the quality could be better. After all, the TV series feels pretty cheap and cheesy no matter how much money they sunk into it. Anyway, I am happy they made it and hope they'll keep publishing more Witcher content.

Now I feel like replaying The Witcher 3. Looking forward to the next-gen version
Last edited: January 17, 2022

Nice summary. The only things I view differently is that I liked Season 1 a little bit more than Season 2, and I liked both Geralt and Ciri more than Yennefer. CDPR's version of Yennefer just seemed so much better to me.

I thought Season 2 started off a lot stronger than it finished. I didn't really care for the last couple of episodes, but I still liked it overall, and my preference for Season 1 isn't by a lot.

I completely agree that they could have done a better job with the visuals especially with the budget they have. I think the monsters look fantastic for the most part, but a lot of the characters just look kind of average for a fantasy series. You really hit the nail on the head about the makeup. I kept wondering why Ciri looked like she had just walked out of a salon.

I've spent some time on the Witcher wiki reading about the characters and locations since finishing the second season. Watching the series definitely makes you want to play the games again.

Nice review! I need to find the books and read them, if nothing more than so I can see what changes CDPR made. There is no point being mad at the show for not reflecting the games if they are closer to the books... My biggest peeve with the show is with the lack of sex in S2. A big thing for me in the games was finding a fresh bedmate in every town, but while we had some good nudity in S1, there is none of that in S2.
If you have no other choice but to kill, you have failed.
Ntwa kgolo ke ya molomo​

JDR13 said:
Nice summary. The only things I view differently is that I liked Season 1 a little bit more than Season 2, and I liked both Geralt and Ciri more than Yennefer. CDPR's version of Yennefer just seemed so much better to me.

I thought Season 2 started off a lot stronger than it finished. I didn't really care for the last couple of episodes, but I still liked it overall, and my preference for Season 1 isn't by a lot.
Click to expand...

Yes, I agree that Season 2 gets worse towards the end. The best episodes were those with a strong focus on the "killing monsters" stories. Pity that they focussed so much on the politics but again time is limited and they probably felt advancing the main story was more important.

As far as I remember, the CDPR version of Yennefer was quite close to the Sapkowski version toward the end of the last books. Netflix does not seem to have honoured the character. Perhaps they'll fix it in the next season but it makes me wonder how do TV-show makers have such a liberty to change already written canon story? Imagine if they had considerably changed the story of Lord of the Rings or Harry Potter in the films. I don't think fans or the authors (or their offspring) would have accepted that.

largh said:
Perhaps they'll fix it in the next season but it makes me wonder how do TV-show makers have such a liberty to change already written canon story? Imagine if they had considerably changed the story of Lord of the Rings or Harry Potter in the films. I don't think fans or the authors (or their offspring) would have accepted that.
Click to expand...

I'm sure there's some type of agreement in place with Andrzej Sapkowski about what kind of liberties they can take with the TV series. Plus, I don't think the show was ever meant to be an exact translation of the books. 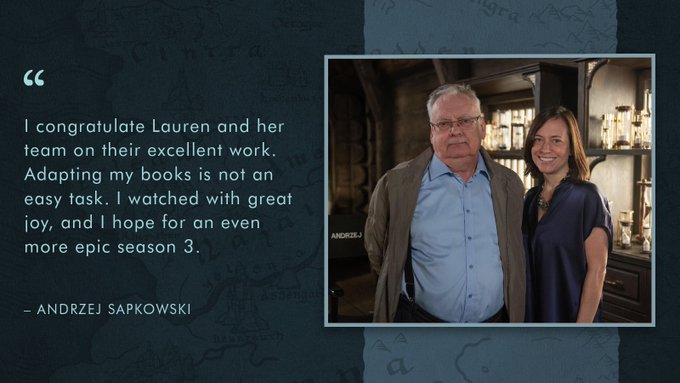 Seems like they plan on making a season per book if the series remains watched.

Yeah, I believe it was renewed for the 3rd season before Season 2 was even released.

It's a shame Sapkowski doesn't give the same sort of credit to CDPR, but I don't think he really understands video games as a medium.

I believe that the series has spoiled one of the most important elements - the relationships between the characters and their personalities. For example, I completely did not feel the bond between the witchers and Ciri.