Hey guys, so I've had this stuff coded for a little while and figure I'd put it out as a nice little update, hope you're all doing well

When being inducted into the wild world of Warsim, it seems only fitting that you are first met by a random and possibly strange crowning ceremony. I don't know why I didn't think of this sooner, but here it is! 20 different crowning events, 200 total possible crowning ceremonies!

After playing around with the debug system I've fixed the game just straight up freezing/crashing when testing an encounter. Once the game tries to run the throne room event 1000 times it will fail and boot you out.

Saw this little encounter and got a funny idea. Previously your choice was 150 gold to cure him guarenteed, or refuse and see the disapointed frog man hop away. Now you can try and cut corners with a 4/5 chance of disaster, or a 1/5 chance of nailing it!

After the new coinflipper update it's expanded the encounter to be a lot less samey... except when you win all their gold. This had the same blanket response, which wore out pretty fast for me so I've expanded this with a ton of possible outcomes to make it a lot more varied... I'm thinking of you maniacs who like to build big empires and then see every single one of those 2549 visitors.

I'm continuing to plow through Warsim stuff on my gigantic list, can't say when the next update will be but I'll be a lot more active across the Warsim community sharing my progress on it regardless

While this might not seem like a massive update the work that's gone in to it is pretty huge! A massive update to mercenaries and how they function as well as a number of smaller side features!

For some time mercenary attacks have used Warsims old combat system, now it's being updated and coming with it's own extensions to the combat system!

End of turn report after a ton of player merc use
https://i.imgur.com/y1NH3PD.png

After a while wrestling with and even partially coding a multi attack system for the player and AI it ended up not being feasable, this was unfortunate but as an alternate source of multiple per turn attacks increasing to help with the exponentially growing kingdoms when discovering new lands I opted for this system, and additionally to not make it one sided in the players favour I spent some time creating a system that allows enemies to use mercs too!

MERCS OF THE ENEMY (17 features)

This has always been something that should have been a thing, but now enemy kingdoms can hire mercenaries and use them to fight you and their enemies! There are some rules and structure to it but otherwise you'll see the mercs getting a lot more use. Want your favourite group safe from being used? Hire them permanently instead of for one off attacks.

Some merc attacks reported at the end of turn
https://i.imgur.com/KlANXCT.png

Some merc attacks at the end of turn but with advanced spy reports
https://i.imgur.com/KXYDHkL.png

Player being attacked by mercs
https://i.imgur.com/XJBSgZC.png

A steam user pointed out that if you choose random race packs you can sometimes end up with a pretty bad batch and just have to either roll with it or restart the game, It didn't take long to put this in and now you can keep rerolling till you find that batch that suits you and your world!

After a steam discussion I decided to add this system to the game allowing the background colour to be changed to a number of pre-sets!

One of the screens
https://i.imgur.com/tn1L5SI.png

And in a different colour
https://i.imgur.com/Av34TQ5.png

A few bug fixes entirely thanks to player reports, as always thanks guys!

An australian friend of mine enlightened me to an aussie word for the poo you take the night after drinking, I thought it sounded like a goblin warchief!

This update has been tested thoroughly but Warsim is a wild beast and many things may have slipped by. I'll be trying my best to keep on top of this while I continue forward trying to finish the remaining combat update work and pushing towards the long awaited Warsim release!

This is an exciting update for me, all factions are now covered by the combat update code, and we have WARBEASTS!

This massive chunk of work sees every single faction in game now use the new combat system, gone are the days of the ever scrolling death notification! Hurrah!

This has been heavily requested for a long time and as I was about to release this update I decided... Why not and spent the entire night and much of the following morning adding and testing this! Now monsters can be sent to battle alongside your brave warriors!

After adding the above monsters in battle update I decided I couldn't just leave them without any additional upgrades, so I created a system of varied armours that can be given to your monsters!

Seeing as we're expanding the monster system and making them more used in game, it made sense to add more of them! Previously the game could generated 27840 of them, now where at a whopping 42875 with the newly added parts all combining together... God I love combinatrix.

More bugfixes including a strange one that made all mercs 25x weaker... Can't have that! As always thanks for all the reports guys, and sorry about the bugs haha.

A couple of changes and fixes... and the casual removal of the long outdated minor goblin clans (sorry Gobbos)

I am going to turn my attention to adventurer groups as soon as I can and hopefully get to work on a big update!

Saw this random demi-god adventurer group leader. Sod the Rock sounds like something an english man would say if he disliked wrestling hahaha

For anyone who has discord by the way, we have a lovely and fairly active discord for Warsim with 100s of members

Join the The Realm of Aslona Discord Server!

Check out the The Realm of Aslona community on Discord - hang out with 322 other members and enjoy free voice and text chat.

It's been too long since Warsim has had an update, and that as usual makes me feel a bit uncomfortable. The reason for the wait is a good one though, this adventurers update has ballooned into one of the biggest Warsim updates ever with over 7 billion new Warsim adventurer quests added, a total overhaul of Adventurers with much deeper effects in the world, new and revised systems for contacting them and conducting diplomacy and tons more!

It's nearing the final stages now as all I have to do is finish my testing, getting the saving and loading of the adventurer files to work better, and then it should be good to go.

I have two main concerns on the road to this updates release.

During a playtest where I spawned 10x the number of groups than the game default provides, I ran 300 years of adventuring and near the end, for no clear reason, there was a lone crash. I went back and tried to replicate it with no success, and I honestly have no clue what could have caused it.

I'm honestly sad it was so rare because the cause of it could be literally anything. There is nothing worse than a crash bug and those are the ones I focus on most.

The other concern is that the update has so many new features and parts that mentioning them in one changelog might be too big to post on as most places have a character limit and I have had this issue before with a previously gargantuan update, I suppose that's a good problem to have unlike the former!

Regardless, thank you for reading and following along, Warsim work is still plowing on even if you aren't seeing any updates!

Cheers and all the best

New Warsim Release 'Warsim 0.8.5.3 (Adventurer's Overhaul, 340 features)' is live finally after months of work! Techically over 7 billion new additions but we won't go into it haha! Happy to answer any questions, see the update changelog and screenshots on the steam link below! 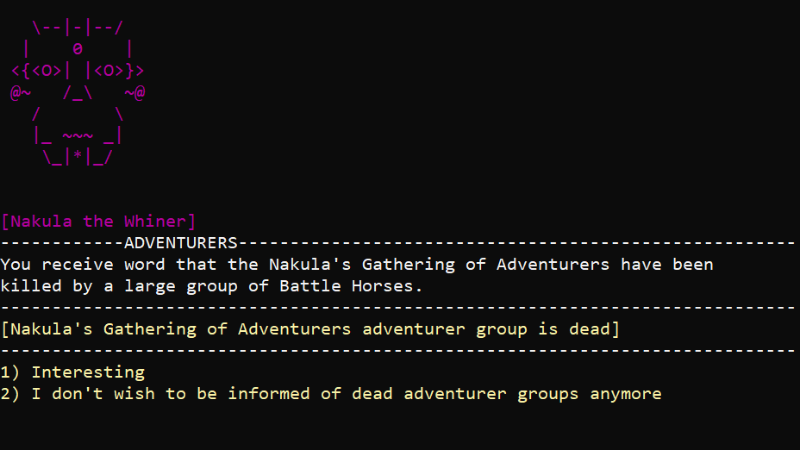 The adventurer's overhaul is finally here! Technically over 7 billion features but we'll stick to 340 for simplicity :) (See inside for more info and screenshots!)

It was content made mostly by AI with some extra stuff and slight tweaking by myself... Is this the future... Probably not. See the update changelog and screenshots on the steam link below! 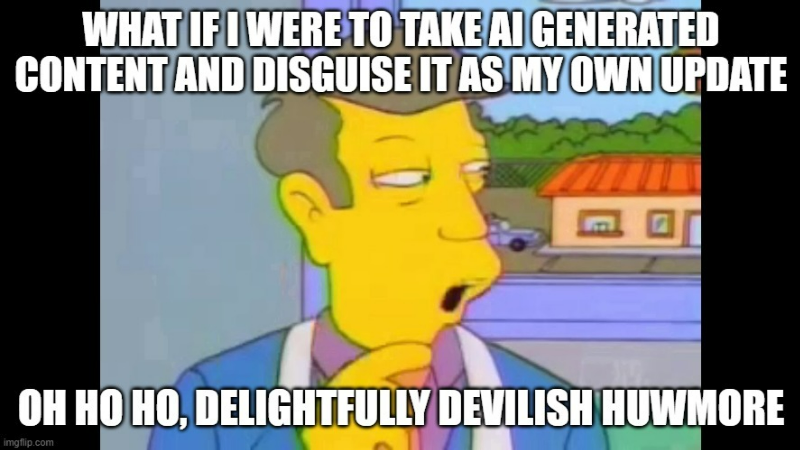 After feeding all of Warsim's content to the AI I let it come up with 100s and 100s of new pieces of content and added it to the game... The future is now!


I made a playthrough today showing off what to do in your first year of Warsim for those unsure of what to do!

Let me know what you think if you do watch it

Just released the first episode of me trying to play a run on solid mode of Warsim. Was a shitload harder than I expected honestly, been too long since I've done it hahaha... You'd think I'd be better at my own game right?

Second episode of Warsim's solid mode dev playthrough is now live on youtube! It's starting to look a bit less bleak at least!

The third part of the saga of Pyrala, the age of conquest is upon us!


Fourth and final episode will be live tomorrow!

The final episode of my four part attempt to play Warsim on Solid mode is out! https://youtu.be/absandzzVwo 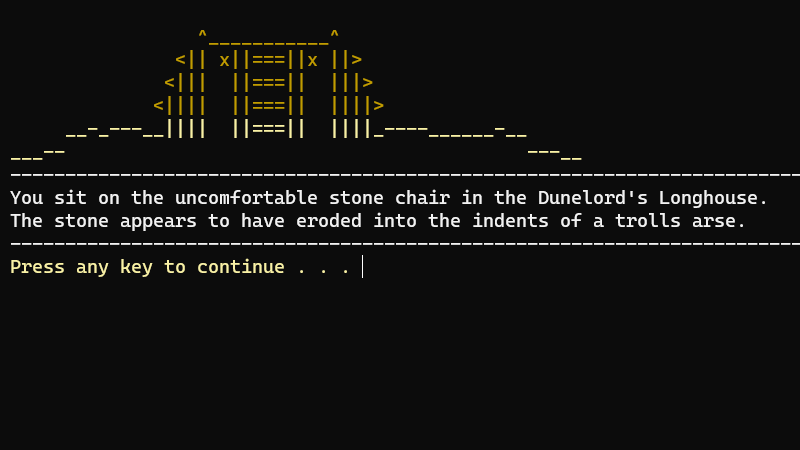 Warsim: The Realm of Aslona - Warsim is coming out of Early Access soon! - Steam News

Hello everyone! Just want to update you guys with the direction of Warsim going forward and what has been going on behind the scenes :) So currently I'm working on the final update for Warsim before I push it out of early access. The early access release is almost a formality at this point as...

After starting this game as a test project in late 2014 to learn to code, releasing it on steam in 2017 and years and years of development and additions for the community. Warsim is finally out of early access! 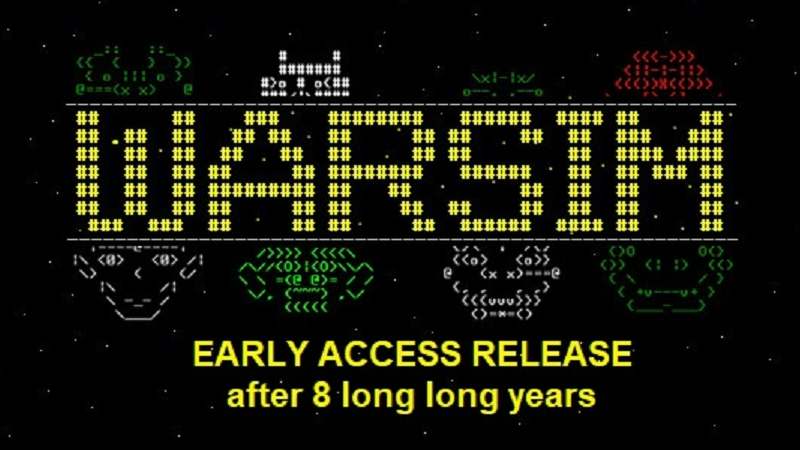 
And the release is going amazingly!

Thanks to all the new people who've picked the game up recently!

Congratulations! - I make a newsbit of this video.

A secret in Warsim that most don't know about, always makes me chuckle when it's discovered

HiddenX said:
Congratulations! - I make a newsbit of this video.
Click to expand...

Thank you mate, only just saw this comment now <3