We're very proud to release to you all the fourth community update for Wartales! This update is built primarily around some of the most popular community requests we've been receiving, addresses and implements a number of issues and suggestions we've seen over the last few months and massively changes multiple aspects of the game!

In addition, following a very successful beta period, the much requested Chinese localisation is now live!

Chinese language has been implemented and is now available in game.

SYSTEM UPDATE - Fleeing merchants!
When you attack a merchant caravan, the merchant units and their ponies will try to flee the fight while their mercenaries will fight you. Catch them before they run away with their cargo!

SYSTEM UPDATE - Suspicion
After much feedback, we wanted to allow more freedom and risk-taking with the suspicion system.
In this sense, the suspicion is now divided into 5 wanted levels of 100 points each. You become wanted when you pass the first level and each level will make your life more difficult by sending more powerful and better prepared patrols with waves of reinforcements.
Unlike now, you will also be able to steal while being wanted unless you have reached the final search level which makes you public enemy n 1. At this stage, we don't give a damn about your skin...
To round off this update, we've also reviewed the various bonuses and penalties for suspicion.
If you're feeling like a thief, then brace your horses and get ready to run!

SYSTEM UPDATE - Choose your companies specialities
Following your feedback, we have decided to limit the randomness in the leveling of your units. In this sense, we have implemented a new knowledge that allows you to spend Influence to allocate your units' Attribute points as you wish and keep total control over your companions' evolution.

SYSTEM UPDATE - Partially-controlled ally!
Your extensive feedback on the subject has helped us to improve the ally system. So now, for each ally that fights alongside you, you can now select a stance that gives you more control: Flee, Defense or Attack. Meaning no more incidents of your allies randomly marching themselves to their doom...

NEW Tomb of the Ancients!
Recent excavations have uncovered a new ruin at Tiltren.

cant wait till it is finished!
by the way, the font on the forum is huge! (the site it self is fine)
Last edited: July 23, 2022
Everyone thinks i am crazy, but i am just adjusting to my environment.

ikbenrichard said:
cant wait till it is finished!
by the way, the fonts on the forum is huge! (the site it self is fine)
Click to expand...

You can edit your font in the preferences. It has an alternate smaller font size.

Is this game worth playing already ? It's on sale, so I'm wondering if I should get it.

Pladio said:
Is this game worth playing already ? It's on sale, so I'm wondering if I should get it.
Click to expand...

If you don't mind playing Early Access games then maybe, but going based on the last update I'd say wait. The last update had a roadmap with the upcoming content release. 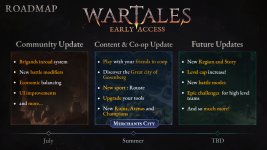 I consider it worth playing myself, really enjoy it. For an EA game it has been pretty stable. That being said I have never minded EA games or Beta or what have you. I ignore them if not interested or get them if I want to try them.
And Still I Dream ...

Pladio said:
Is this game worth playing already ? It's on sale, so I'm wondering if I should get it.
Click to expand...

It's playable already. Whether it's worth playing depends on you. It's not a total sandbox, so by playing it now you'll have seen a bunch of the specific content. If it doesn't bother you to do that over again in the future as more of the game comes out, then you're more likely to want it now. When I played it a few months ago, it was rough around the edges in parts. Things like alpanumeric strings coming up instead of names. Not a ton, but enough to be noticeable.

I'll wait a bit then if it's got more specific content.

Yeah, these days on a lot of text heavy sites I have to CTRL-+ it so I can read them comfortably. This is already big enough for me.

I watched some 'tube of this yesterday and saw there was QTE event stuff in the game and turned off the video. Why...

Voqar said:
I watched some 'tube of this yesterday and saw there was QTE event stuff in the game and turned off the video. Why...
Click to expand...

Eh. That's unexpected, I suppose it was triggered in combats?

I haven't seen any combat QTE's (could have missed them though) but there are some in crafting to improve quality, or mining, or fishing, or other crafting/food related tasks. As someone who doesn't like QTE's I thought they were fine here and an actual improvement to make using the skills a bit more interesting.

As an example if you are smithing something you can time your mouse clicks to improve the quality of an item.

My main dislike of QTE is when it is for twitch based combat and I don't recall seeing any of that this game.
And Still I Dream ...

Based on past replies for this game it was mentioned there might be some timed quests or battles. I personally haven't played the game yet so no opinion. Hope it's not used a lot.
"Opinions are like assholes. Everybody's got one and everybody thinks everybody else's stinks."