What are you reading ?

I took a slight detour from what I'd planned on reading to revisit She-Hulk! Right now I'm on the second volume that collects the entire run, utterly fantastic still and much more enjoyable than the show.

I finished the She-Hulk series last night, a fun trip back to comic book days, never to be seen in this light again. At least we have the media well preserved.

Now I'm finally onto the Power, a look at present day life if girls/women suddenly developed the ability to discharge varying electrical charges. So far it's pretty enjoyable, a slight bent on the homo-superior genre.

I recently started reading the Deverry books by Katharine Kerr. I'm on book four and enjoying it a lot.

Recommended for anyone who enjoys Celtic fantasy and a magic system more focused on subtle effects and manipulation.

This morning I wrapped up the Power, and while the premise was interesting, the points of views selected for narrating the tale left much to be desired. I don't see me ever re-reading this, yet if there was a follow-up I might check it out, simply to see what happens next.

Now I'm back to the Reacher series, with book twenty, Make Me. I'm ten percent in and hooked!

I concluded Make Me this morning, this one starts off with....well, you really don't know what's going on, then it blooms into this massive conspiracy. Along the way, Reacher sustains what, seems to me, to be a significant head injury, and I'll be curious to see if that carries on to the next book.

This evening I finished up with Concrete Blonde, a fine and dark entry in the Bosch tales. I'd never read this book before, and the author did things quite different from the telly show, making it way darker, imo. Fortunately, we live in times that we are able to enjoy both!

Now I'm onto the next Lincoln lawyer tale, Reversal.

This afternoon saw me concluding the Reversal, a Haller story that also features Bosch among the guest stars. What a great read, as this tale sees Haller as a special prosecutor for the people, with Bosch serving as his investigator and McFierce as co-counsel. The only issue I had was that I wound up spoiling some future things for Bosch, as this one takes place far in the future of where I currently am in those books. I'll likely do some catching up there before coming back to the Haller series.

About to start Stephen King's latest, Fairy Tale.
Proud leader of the Shit Games Liberation Front
All your shit games are belong to us

I finished the latest book in the Reacher series for me, Night School. This one takes place back before Jack leaves the Army, and most of the action is out of the US, which is always a treat. Another good, solid tale with further explanations as to why certain folks remained very loyal to Reacher.

Up next for me is the Island of the Day Before, by Umberto Eco, the chap that wrote one of my all-time favourite tales, Name of the Rose. That's the only other book I've read of his, and so far while this tale is quite abstract, I'm enjoying it.

Carnifex said:
Up next for me is the Island of the Day Before, by Umberto Eco, the chap that wrote one of my all-time favourite tales, Name of the Rose. That's the only other book I've read of his, and so far while this tale is quite abstract, I'm enjoying it.
Click to expand...

I read Foucault's Pendulum after Name of the Rose, but it's a completely different style. It's full of references to very different doctrines, sciences and history events, and it's never entirely clear whether it's taken seriously or not, which makes the story a little difficult to follow. I'm curious to hear your thoughts on Island of the Day Before after you're read it.

Last night I wrapped up Island of the Day Before, and man, this was a really different kind of read, at least for me. Much of the tale is abstract, a lot taking place mostly in the main character's thoughts/feelings/intuitions, so that's something to consider also. The setting is roughly four hundred years ago, with people thinking, believing, and acting as they did back then, which can be both good and bad, yet totally enlightening at the same time. If any of Eco's other works have worked for you, I think you'd enjoy this one as well.

Now I'm on to the next Reacher tale, the Midnight Line.

This morning I completed Midnight Line, book twenty-two in the Reacher series. This tale finds Jack in the US mid-west, where he happens upon a West Point class ring in a pawn shop, and he's curious as to how it wound up there. Backtracking the ring, Jack finds drugs and other shenanigans going on, and you know what that means: it's clobbering time!

And a few hours ago I went back to the Companions of the Hall books, with Servant of the Shard. Though this volume seems to be focused on Artemis and not the Companions per se.

Servant of the Shard is history, this one focused mainly on Artemis, with appearances made by Cadderly and his merry band. Specifically several folk decided to truly attempt to destroy the crystal shard once and for all, while a few others wanted to retain the item.

Now I'm back to the Reacher series with Past Tense.

This morning I concluded Past Tense, which sees Reacher going back to the town from which his pop originated from, with all sorts of interesting results. And some other criminal stuff of course springs off at roughly the same time.

Now I'm back to the Companions of the Hall books, with Sea of Swords, which I believe is book thirteen of the series.

I'm currently reading Memoirs of a Stuka Pilot by Helmut Mahlke, which is an English translation of the original. It's longer than expected because the number of pages were erroneous on the website I consulted, and it's a little dry but not too much - normal for an auto-biography.

It's interesting to see the point of view of a soldier who was on the German side, and how they felt about it, but it's not the right forum to elaborate. It's also amusing to hear about about several battles in which other authors participated on the UK and French sides, like the invasion of France, the evacuation of Dunkirk, missions over UK and Malta. It's also a good complement to Stuka - The Doctrine of the German Dive-Bomber that I backed not long ago on Indiegogo.

This was the last series of Holmes stories written by Conan-Doyle. And you can kinda tell he wasn't really into it by the last few stories.

The first 5 are pretty good and what you would expect, but then after that the quality declines quite rapidly, a couple of the remainder even excluding Watson entirely as Doyle experiments, somewhat unsuccessfully, to write stories entirely from Holme's perspective with Holmes as the narrator instead of Watson and Watson not in the story.

Not only that but the twists, intrigue and general deduction aspects also start to evaporate with the whole story just being exposition with Holmes solving the case in the last paragraph with one clue.

It's still an interesting read none-the-less, especially the better initial ones, including a couple of more actiony two-parters, just the latter half of the stories feels like a bit of a waste of time. 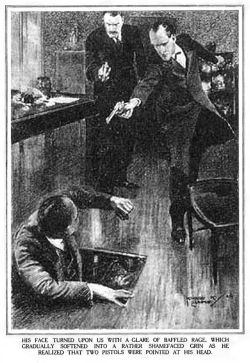 The stories are mostly set around 1902 and it's interesting to see a black character feature prominently in one of them. Admittedly, he's a criminal character and, admittedly, there is a use of the N word and all that, but the character is still written in a sympathetic way and, more importantly, shows that black culture was indeed something that existed in London even at that time. 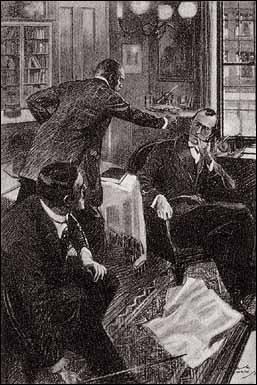 That case book is superb, something I tend to re-read every five to ten years. It's just that damn good.

Yes, it's a book I've had for about 30 years that contains the entire works of Sherlock Holmes reprinted as published in The Strand magazine upon release. It's a real doorstop, 1126 pages long, the pages being the thickness of weak tracing paper, and the writing is so small it's only just barely legible with old eyes in unnatural light.

But it still gets rereads from me every now and then, and will do until it falls apart.

Sea of Swords was good, back to some of the swashbuckling antics for the Companions of the Hall, or at least some of them. And you also get introduced to some new folk along the way.

And I also wrapped up His Dark Materials, the first three books in one collection, a tale I'd always meant to read yet never had. It starts off more of a juvenile story, yet the themes broaden quickly and I daresay anyone of any age could enjoy these tales, they will have you thinking a great deal long after you finish the books. Not sure if I can lay my hands on others in the series, I'll look into that.

And now I'm back to the Companions in the Hall, with the Thousand Orcs, book one of the Blade Trilogy.

Memoirs of a Stuka Pilot managed to be interesting until the end (except the long appendix with logs and data, though it may be interesting for historians). The author found himself in many different situations, and had his shares of ups and downs, so he had many things to say. The comments on the general organization of the Luftwaffe are interesting as well, and confirm opinions I've already heard before.

Starting Holy Spy by Rory Clements, it's unfortunately the last of the series. I'm starting to run out of authors for that type of historical fiction, I'll have to jump to another period of history. (not to worry, there's more in the Rome series by M.C. Scott)