Last test was announced and the min sys reqs as well; one more month baby

And some interesting stuff 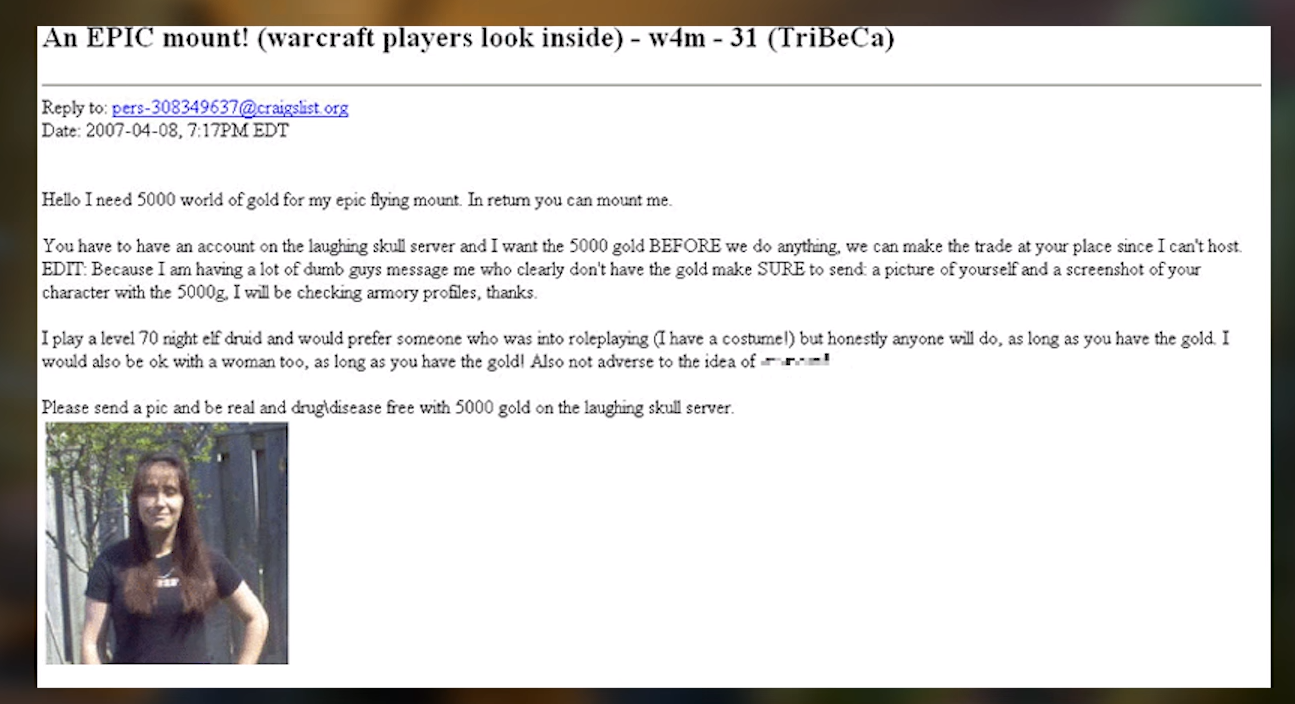 haha, i bet we will going to see stuff like that again
Steam
Favorite game Witcher 3/Gothic 2

I would like to try this but I am currently knee deep in Everquest 2 and FF14 so have to skip this. Its the same reason why I skipped wow back in 2004

I played World of Warcraft for about a week when it first launched, and didn't care for it when I compared it to Everquest, which I was still playing at the time. I doubt I'd care for Warcraft any more these days, right now the only online game I'm dabbling in in Pantheon, and I'll likely be sticking to that.

I never played vanilla WoW - although I'm intrigued, I'm not sure if I would have enough time nowdays to fully experience this.

I enjoyed Everquest more but Classic WoW was fun. I think I will have to play this because the first month or two on new servers are the best.
"From knowledge springs Power, just as weakness stems from Ignorance."

I played vanilla WoW for years, ended up getting into a clan and all that - it was a great game at the time.

I re-installed it a couple years ago, and i found the game a shade of it's former self. I made a Hunter, and couldnt believe what I was seeing - I STARTED with a pet. I was flabbergasted, and quite frankly offended just by that fact alone. There were other things that pissed me off, I dont remember the particulars, but I steamrolled thru a handful of levels, explored a little bit, and disheartened i uninstalled the game.

"Back in the old days", as they say " Hunters had to wait until level 10 to even GET a pet, and even then, we had to research the region where the desired pet lived. Then, like a Hunter (imagine that) we had to set out, often at our own peril, to go and attempt to TAME the pet that we wanted. Pets needed to be trained, had levels, happiness, loyalty…."

Back in the old days we had to wait until like level 40, and you needed a ton of gold to get a mount. It was a big deal to get your mount. There were people flopping all over the starting region with mounts, so they probably throw one at you at a low level, for free

In BFA i think there is a mount you can ride from level 1, comes from an achievement, if you get a certain number of heirlooms; in classic no such thing, first mount is at 40.

Hastar said:
I enjoyed Everquest more but Classic WoW was fun. I think I will have to play this because the first month or two on new servers are the best.
Click to expand...

I never played Everquest but played Everquest 2 and I still do. However, I did play Classic WoW and found that really fun too. I stayed with EQ2 since I had good set of friends there and it was more group focused than WoW.

Open world PvP was really good in Classic WoW and I would like to give that a go but time is the issues sadly.

I also enjoyed EQ2 for about a year. I played one of those progressive servers two years ago and had a fun time for around three months. The outdoor zones in EQ2 are fantastic. I enjoyed the dungeons in EQ1 more.
"From knowledge springs Power, just as weakness stems from Ignorance."

I've learned over the past decade that when I've tried out other online games, I'm looking to recapture those years I spent with friends in Everquest one and two. Three or four years ago I decided to stop trying. The games can be diverting for a while, but without those friends, it will not last, at least not for me.

Other than nostalgia for old-time fans, I can't imagine why anyone would want to play something as clunky and dated-looking as this.

Look at the video i posted earlier

porcozaur said:
i guess europeans wont have much trouble with this
Click to expand...

Depends on who will be playing it. Method is European after all. If they end up creating a WoW Classic guild, that sort of thing will definitely happen there. I don't think they will though, as they're too focused on the esport aspect of WoW.

The ones to watch out for here are probably Preach and Bellular, two of the biggest WoW streamers. I suspect they will both play Classic actively.

Personally, I'll try Classic until I get bored at around level 18 or something. Getting to 60 is simply way too grindy and time consuming for me these days. Besides, I've already done, seen it and still have the original collector edition pets.

Stress test is live and only 2 servers on atm, 10000 in the queue from what i read lool
Steam
Favorite game Witcher 3/Gothic 2

Carnifex said:
I've learned over the past decade that when I've tried out other online games, I'm looking to recapture those years I spent with friends in Everquest one and two. Three or four years ago I decided to stop trying. The games can be diverting for a while, but without those friends, it will not last, at least not for me.
Click to expand...

This is spot on. This is reason why I still play EQ2 since the friends I made back in 2004 are still here. When all said and done, a MMO is really about the people who you play with and the actual game doesn't really have to be great.

JDR13 said:
Other than nostalgia for old-time fans, I can't imagine why anyone would want to play something as clunky and dated-looking as this.
Click to expand...

This is a fair point and only time can tell. However I have a feeling that WoW Classic will catch on. I think there is reasonable size MMO players are fed up with most modern "single player MMO" and who long for more community based experience. Irony is that when WoW Classic was released it was criticised by many other MMO players at that time as "single player MMO" and rightly so! But it has more social hooks than most MMO these days.

For these people "clunky combat" and dated looking graphics don't matter. Having said that the combat in wow classic is much better, fluid and feel more impactful than modern MMO such as ESO so its not all that bad.

Edit: "dated-looking" - Apparently its an option to play with original wow graphics or use modern graphics as well.
Last edited: August 9, 2019

Test is over, they let it open for the whole weekend; didnt played it since i wont pay for a "demo" but from what i read, serious problems with that layering shit.
edit 2 more weeks, cant wait to play though i doubt it will be fun in the first week.
Steam
Favorite game Witcher 3/Gothic 2

I have mixed feeling about layering. One one hand, I don't want long login queues or do I want wait very long time for mobs to respawn. On the other hand, I do want to see lots of player around me! So I hope they fine tune the numbers for go live.