Here's the current roadmap of Alaloth: Champions of the Four Kingdoms:

We've just updated our plan for the next 90 days. Check it out!

It has been a while since we've published our first development roadmap and it is time to update it! As we announced last week, we have done with mouse & keyboard and tested the new features for a while. We had a bit of regression on the way but it was pretty normal, considering that we had to rework the UI entirely. We don't expect major bugs but in case, poke us as usual and we'll try to fix everything at the speed of light.
In general, we have to say that we have been faster than what we've originally predicted and of course even if we have decided to stick with the original plan we've drafted, lot of new ideas have been discussed by the team, following your feed and new inputs from new partners willing to jump in and help us with the development. The result is that the contents that we are going to put in will be way more than the originally predicted ones and we hope this would be just one more proof of the effort we are putting in our work, to make Alaloth the great game we've always had in mind.
We spent some time data at hand in the last month, checking other games available on the market as well and putting together a few numbers. We can say that Alaloth is currently the biggest RPG game on the market in terms of contents, considering the size of the world, the number of locations and NPC we have and so on. Proud of this! Let's go with some more info for you all! 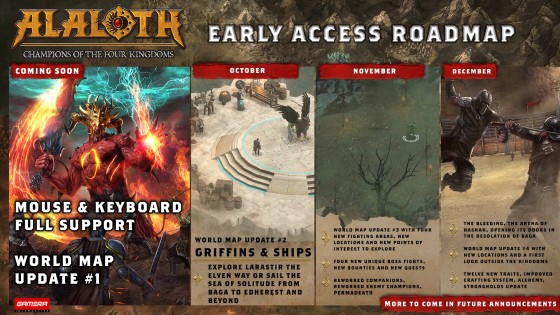