The Alpha Progress update for Copper Dreams has plenty of details on systems progress.

Greetings everyone! We wanted to do a quick dive into some of the stuff we've been putting into alpha builds since we started having folks test them the past few months! Next week we'll be doing a play-through of a testing arena map to give you a better look at gameplay in action, but figure it could use a primer first.

The remainder of the alpha builds will be these various arena death-match maps to continue testing combat and companions, as well as the remaining milestone features we'll be hitting this month before the beta!

keeping a sharp lookout for the beta

Since launching the alpha, integrating companion gameplay with the step-by-step turns had begun to be the primary focus, and a lot of these changes will be stemming from that. 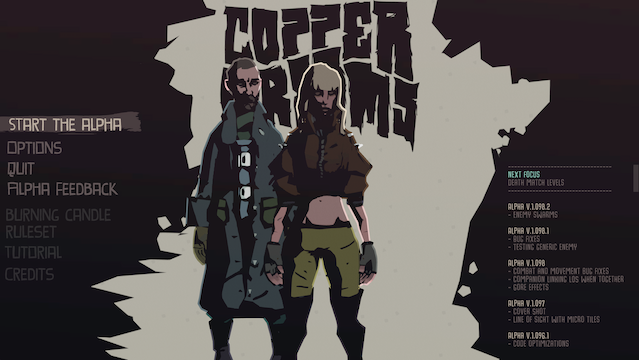 One of the early things some of the alpha players found clunky was the action selection, so that has been streamlined. All actions for an item are now clumped together in the action button area, instead of filtering them through individual skills. These are located in the middle of your action bar, with non-item skills located on the left and some formation stuff on the right.

Skills on the left, when selected, repopulate the middle area with actions for them, so no further in-game world space is taken up.

Fully controllable companions have been added into the tick-tile system, as most of this update will pertain to. We've added their health, medical snapshot, and inventory to to the HUD. We've also integrated nested bags, so if characters are hoarding they have a place to put their garbage!

We've integrated the line of sight visual into the micro-tiles, getting a much smoother and easier to understand line-of-sight. This occurs per-character, who additively overlap sight visuals. As before, your characters can still hear NPCs outside the line of sight range (represented by footprints).

It could have been someone friendly, but it's usually not...

A great escape. The local wildlife doesn't like our agents.

We've also integrated the Followship™. This design was meant to convey the feeling of safety exploring as a group. Copper Dreams, the actual campaign, is a dungeon crawler where you'll be creeping around a war-torn city filled with lots of other things that are creeping around trying to kill you. The Line-of-sight visual has always been the backbone of the visual identity in creating that tension. To add to that, characters exploring on their own have a personal sized vision radius. However, when selected together and worming around as a group, the radius is combined and larger, focused on whoever is lead.

The Life of the Party

Our intention was always to remove the idea of Hit Points and replace them with wounds that individually reduce stats of a character. Getting that into a simple system that both feels organic during gameplay, and allows players to reasonably survive and enemies to be killed in predictable ways has been a challenge. With the newest tweaks in the last month of alpha testing, we think we've found a solution.

For an overview, here's a splash menu from the alpha going over it:

Characters accrue wounds specific to body parts. Different damage rolls do 3 tiers of wounds — lesser, greater, and mortal. In the alpha, we've introduced the SHOCK stat to make sure they all work together nicely, which acts sort of like a negative armor modifier.

So that's easy enough — destroying legs make enemies unable to move, arms reducing any ability to fight, and the vital parts are the torso and head (or non-humanoid equivalent, for you to find out). Rolling mortal wounds is required to do that, and that's where SHOCK comes in. Every SHOCK point a character has, regardless of what body part it was on, adds those points to any incoming damage rolls. This would allow rolls to be either more potent within their tier or jump from light to medium, or up to Mortal.

This allows a few gameplay features we struggled to design for with previous iterations:

As we mention below, you can now automatically aim for body parts with any action, so you can always have some agency on what you're going for. 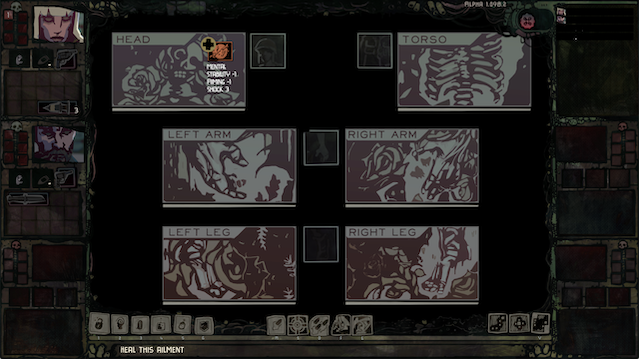 The wounds your players accrue are now visibly seen on their person. Giant nails, gore blobs, embers, bone fragments — the locational damage of the wounds you get can be seen appropriately on your characters body parts. 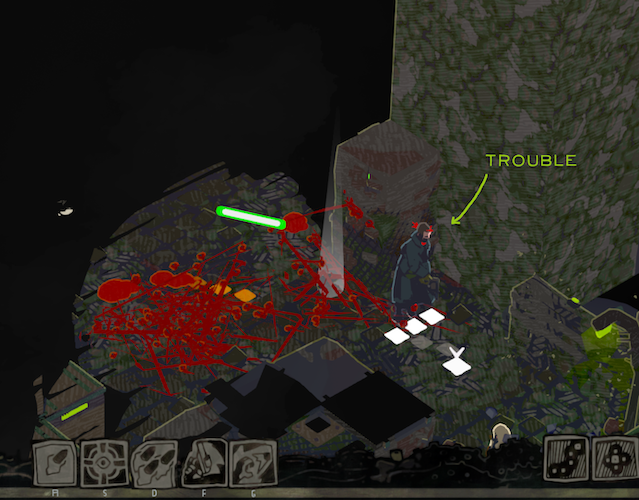 Now those blood decals or arrows that stick into characters have some actual importance — check out enemy damage locations to see what to focus on or what's currently damaged.