Side Quest: Manipulation and Perversion

Side Quests are short pieces intended to kick off discussion. They aren't meant to be finished editorials, so your participation is important!

For many people, one of the most important things in a game, as in life, is the illusion (at least) of choice. This is especially true in RPG's, where meaningful choices and the consequences thereof, tend to separate the good games from the mediocre. The question being asked today, is not just are these real choices as opposed to illusionary ones, but also do the developers deliberately attempt to manipulate those choices so that we have to take a perverse action to thwart their machinations.

Sometimes I even wonder if the developers are sneaky enough to realise we'll see through all their manipulations of the plot and characters, so they deliberately make it obvious - knowing we'll be so annoyed we'll do the opposite of what we think they want us to do, when that was their real goal in the first place. Confused? Me too.

What brought all these thoughts rushing through my head this morning was the ending for Act 1 of The Witcher. I feel manipulated. The Reverend is an obnoxious, arrogant, offensive, hypocrite. He's also old, ugly, male and has a loud, grating voice. There's not much more the developers could have done to make me dislike him either directly, or indirectly.

Abigail, on the other hand, is quiet, soft-spoken, polite, female, attractive, helpful - and she offers to sleep with Geralt. Suddenly, a choice between the two has to be made; which one will it be? Have I really been manipulated deliberately and must I be perverse and go against everything I'm feeling just to avoid their trap? Is this something developers set out to do in a game? Are they trying to direct how we play the game/ Are we being offered real choices, or is it all an illusion? 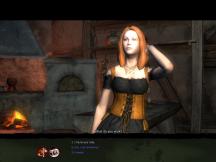 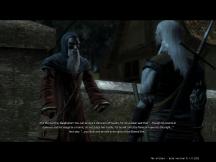 I'm with you on the railroading - which doubtless requires a degree of manipulation to provide some illusion of choice. I don't know about the perversion thing, though…perhaps it's just the way I play but I can't recall taking a particular choice just to stick it to the developers. It is difficult to stay in character and not metagame the choices - will a particular path be as fleshed out? Will my character suffer through losing access to "good" NPCs, training or equipment? Most games have a "right" path, although in most cases this results from concentrating development efforts; we've all seen developer comments along the lines of "why waste resources on content few gamers will see?"

Actually, The Witcher is one of the better examples out there in terms of how the choices work with the gameplay. In retrospect, I can see that most players are going to side with Abigail but at least both options make sense. Did the developers have a preference that players side with Abigail? I'd say "no", but who knows?

But, yes, The Witcher is all about manipulation. The whole basis of the game is to create a fiction where the choices aren't clear - and then turn them around. A good choice has bad consequences down the track. A morally corrupt choice results in unintended good in the future. We're being manipulated so there is an emotional impact when certain events are revealed - and in that sense, I think it's a good thing in this game. Lesser titles don't fully commit to offering real choices and the manipulation becomes transparent and that's the problem I see - attempting to make RPGs without worthwhile choices.

Still don't know about making choices just because I'm not supposed to, though.

I agree that choices and consequences in well-written RPGs are seldom as purely a matter of a player's preferences as they seem, but I also think it's the developer's job to make these choices difficult in order to make them meaningful. If every choice was clear cut between an obvious (and therefore shallow) concept of good and evil, then the game would become not much more than a two dimensional exercise in patting the player on the back for following orders, and be a perfect example of manipulation in it's simpest form of carrot or stick.

In the best rpgs, the player is being manipulated in a way similar to the contradictory forces of real life, where the 'right' choice may be far from exactly what it seems. The Witcher is a bit unique in following this all the way through to making almost all choices and all results ambiguous. Planescape:Torment also throws the player constantly back on his own resources and refuses to define the character being played except through the medium of choice and how each plays out, and further adds a back-looking mirror in the form of the present consequences the player must deal with of choices made in the past. Is this manipulation, or is it interactive story? I tend to think it actually gives the player a greater freedom, even though in some senses it's a freedom that comes from a scripted direction chosen by the developers.

Consider other games you've played recently. Do you ever feel railroaded by events and choices? Did you then deliberately take the perverse option just to "show those developers that you can't be manipulated"? I know I have done so, and then I wonder if that was the choice they really wanted me to make all along. I doubt there is any definitive answer but I do feel it's an interesting avenue for discussion. Let's hear what you think about this issue over in our forums.