Alaloth - The Wandering Characters of Plamen

Lore Update #7 for Alaloth: Champions of the Four Kingdoms focuses on the wanderers of Plamen.

In the world of Plamen there are many who wander. There are those who've lost it all--their homes, loved ones, and purpose and then there those who by choice or curse are forced to be distant from the rest of the mortal world, until their goal is finally achieved. These latter beings are mortals of great power, either of the body, the mind, or of magic, waiting for someone to come and gain their favor by succeeding where they could not. Though found in the lands of The Four Kingdoms, they are not bound to them, nor do their kingdoms care for them or wish to aid them in their quests. The wanders' only goal is their own, and whether that's good or bad for the kingdoms they dwell in remains to be seen.

The Red Mage is an unknown and mysterious sorcerer who dwells in Edherest by a lake overlooking a derelict magical tower, a Beacon Tower. He is known as a healer to some, a heretic to others, and evil incarnate to those that fear him. Rumors about his heritage and appearance circulate the streets of the kingdom but each story contradicts the last. What is certain to those that know him well enough, is that he does not bear ill-will against Edherest, on the contrary, he wishes to save it from the ever present corruption that has been seeped in from Alaloth and from unchecked magic. He wants to restore the Beacon Towers, colleges, and human society to the days of peace. The Red Mage is waiting for a champion to arrive at the doorstep to his tower and take on a task that will benefit them both, only after completing it will he know if the champion is ready to face Alaloth. 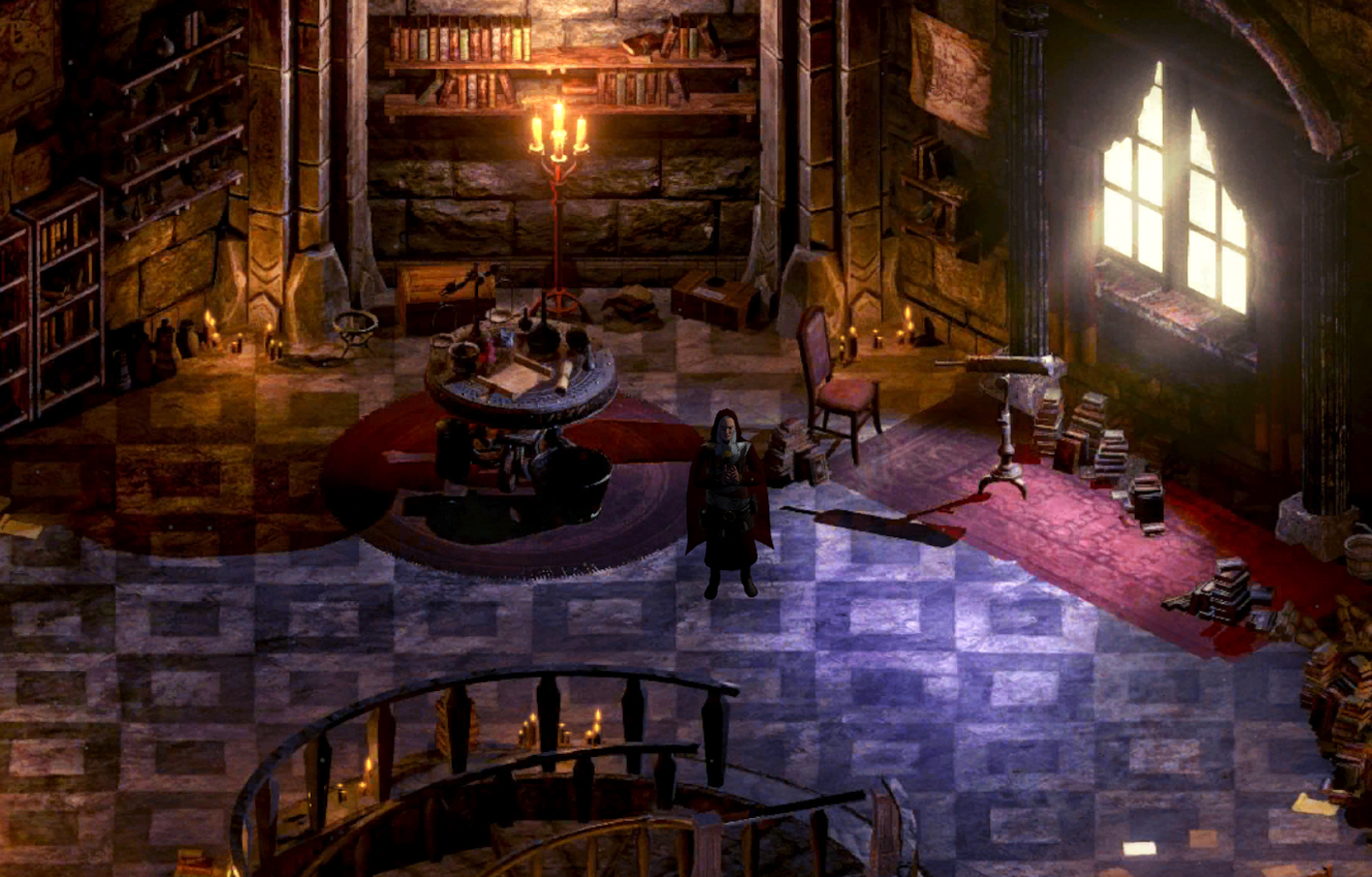 Kellis of the Zephyrs

Once just a powerful mage among the Elven high class, Kellis of the Zephyrs is just a mythical prisoner now, locked in the woods he once loved. He is a depressed and doomed soul who tried to embark on the Retreat, to venture the sea to the next life, but instead found himself trapped within the forest, unable to leave and unable to die. He has attempted to escape countless times but has always failed. Despite all this, Kellis is compassionate and never judges a creature or mortal on their nature, even if they do things he does not approve of. He watches the forest in defeat, and assists those who become lost. He seeks a champion to bring to him what he cannot get himself, to prove their mettle in the face of danger. 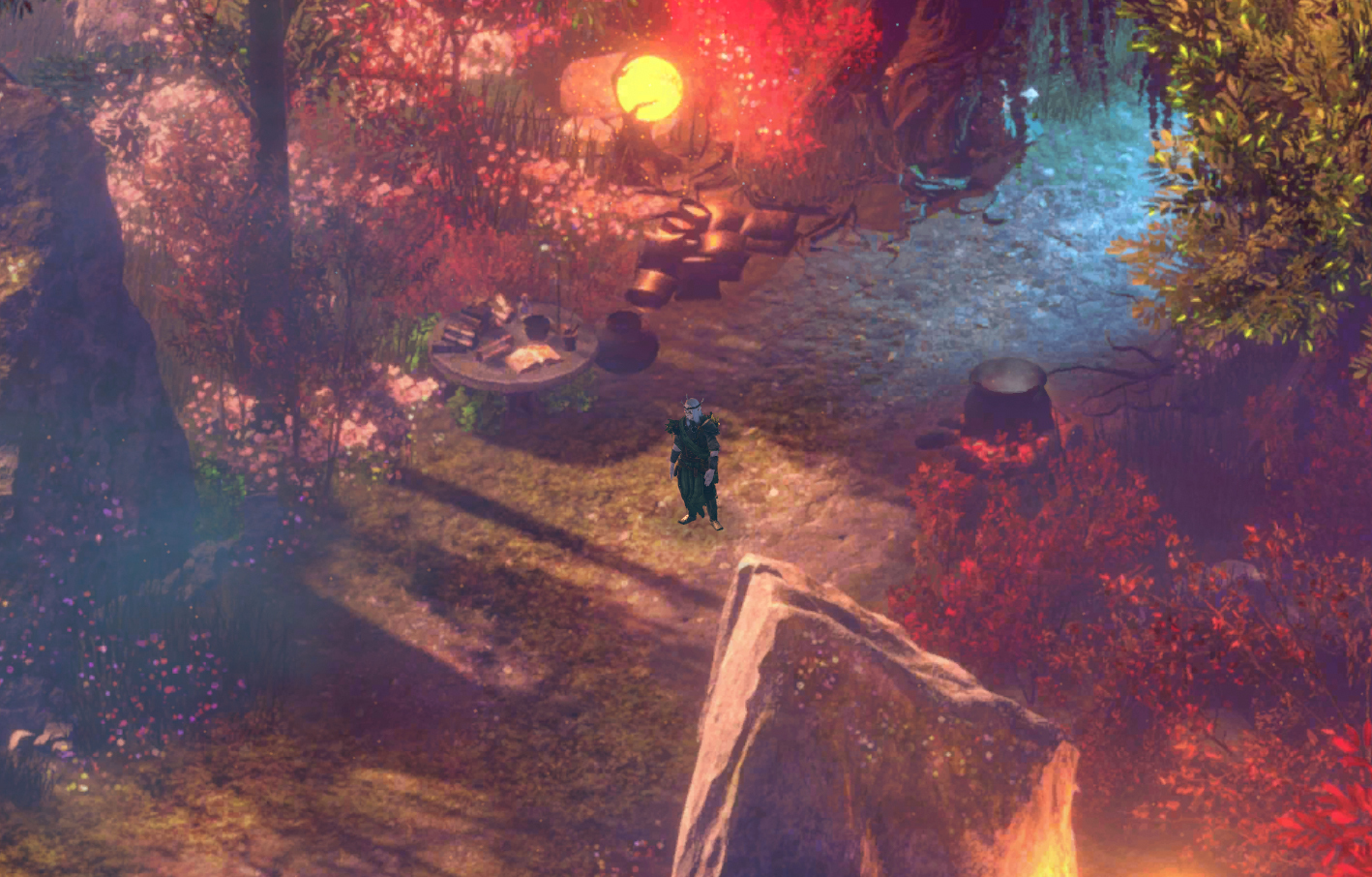 Forgeback is a legendary figure in dwarven history, the great dragon slayer of Karak-Hohn, known for his brutality in combat and the mastery of his craft. He is and always was a great smith, who could forge any weapon to kill a dragon. His hatred for dragons made him violent and unpleasant, with outbursts of anger over his loss that all of Karak-Hohn could hear him from miles away. Forgeback is only interested in seeing the dragon race extinct, not in their stolen gold or the glory of the hunt. He holds a personal vendetta and nothing but the death of all dragons will satisfy that need. In his old age he's become unable to hunt the dragons himself, so he seeks a champion to aid him in his quest. In return they will gain the honor of wielding his work. 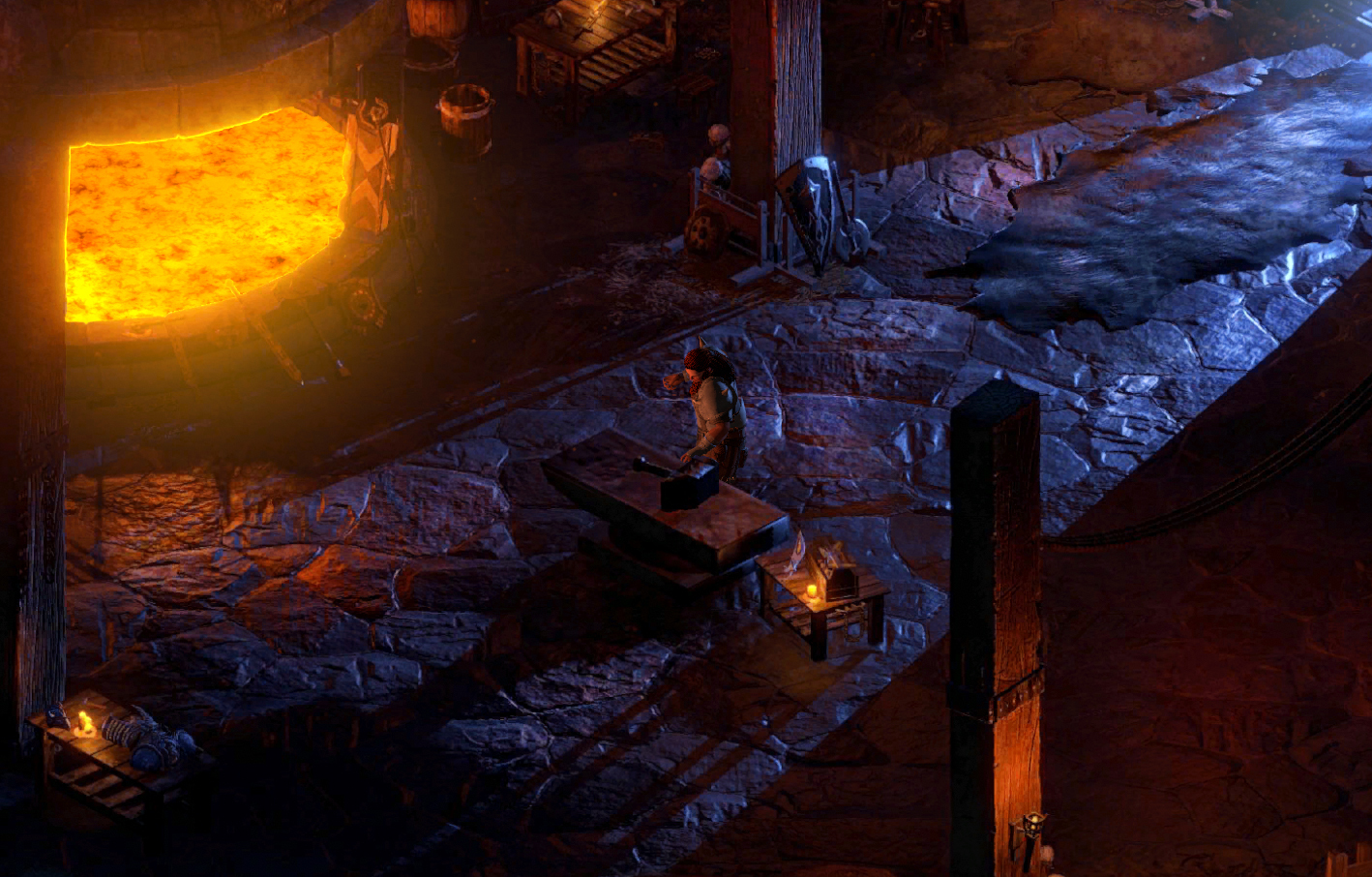 A sinister mystery, guardian of the oasis, exile, blasphemer, saint... These are but some of the words used to describe Nohrged-Kin, the shadowy figure lurking by the waters of the Thirst. He goads pilgrims and the lost to drink from it and watches as the consequences unfold. Nohrged-Kin is seen as vicious and cruel, but he cares not for the suffering of mortals, nor does he wish them ill. He merely wishes to test them in their hour of need.
If there is something he truly detests, it's the gods that the mortals of The Four Kingdoms worship, especially Maraika and the Mother of Betrayers, who hold favor in Baga. His obsession is directed towards rare idols of gods, which he desecrates for his entertainment. He will surely test the champion in his own way, and determine if they are truly the hero that has a chance set the world to rights. 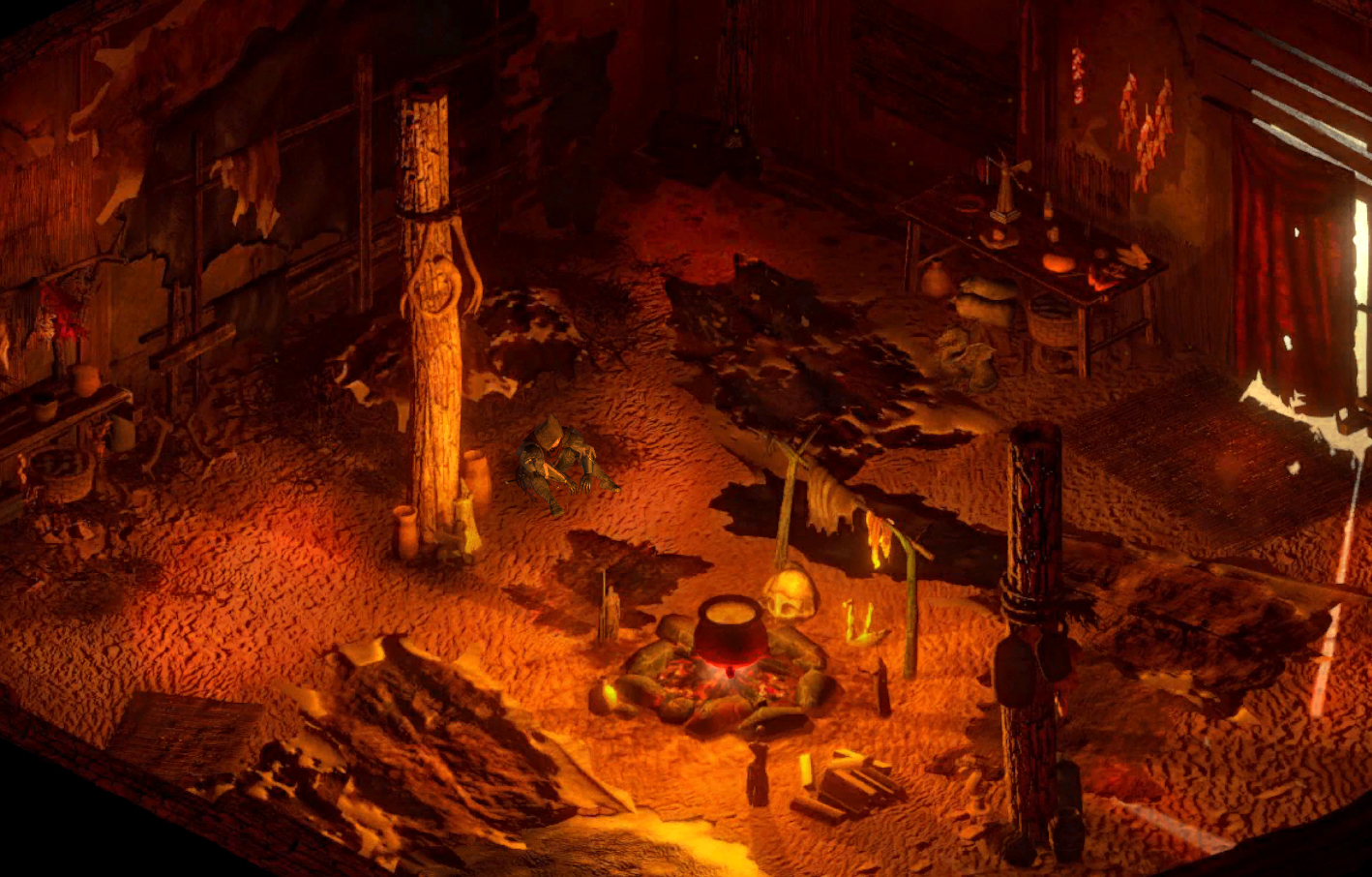 Feels like this game should be getting talked about more (but maybe I'm just outta the loop)... looks pretty cool imo. Looking forward to it!

SSIGuy said:
Feels like this game should be getting talked about more (but maybe I'm just outta the loop)â€¦ looks pretty cool imo. Looking forward to it!
Click to expand...

I think its because the game has an unusual combination of elements. The combat is apparently Souls-like which means I'm not interested, because I don't like that type of combat. But on the other hand the game is isometric and has a story (though how much is unclear) which makes it very different from a typical Souls-like game as they are 3-D dungeon crawlers where story doesn't play much a role.

I think some of it is the action gameplay. Diablo games are fun for a while but they need to be really good to stand out from the crowd.
"From knowledge springs Power, just as weakness stems from Ignorance."

Hastar said:
I think some of it is the action gameplay. Diablo games are fun for a while but they need to be really good to stand out from the crowd.
Click to expand...

I'd actually argue that is true for most games. There are a massive number of tactical games with some RPG elements on the market now, and most of them are decent but forgettable. Personally, though I am willing to give a Diablo type or Tactical game a try, but I simply avoid Dark Souls type games, because I have neither the patience or reflexes for that type of gameplay. Of course Souls-like combat has been in fashion for the last 5 years or so, so there are probably a lot of mediocre games in that category as well.

well i was very interested in this, it was supposed to come in 2019, then 2020 and now in .... also the devs are quite annoying on the steam hub, they dont answer shit, ignore most of the questions
Steam
Favorite game Witcher 3/Gothic 2

forgottenlor said:
I think its because the game has an unusual combination of elements. The combat is apparently Souls-like which means I'm not interested, because I don't like that type of combat. But on the other hand the game is isometric and has a story (though how much is unclear) which makes it very different from a typical Souls-like game as they are 3-D dungeon crawlers where story doesn't play much a role.
Click to expand...

I, too, don't like Souls-like combat either... and I know they say it is supposed to be like that but when I look at the combat, it feels really manageable to me. In fact, I like the look of it. It feels much slower and perhaps more tactical than a traditional ARPG.

forgottenlor said:
I think its because the game has an unusual combination of elements. The combat is apparently Souls-like which means I'm not interested, because I don't like that type of combat. But on the other hand the game is isometric and has a story (though how much is unclear) which makes it very different from a typical Souls-like game as they are 3-D dungeon crawlers where story doesn't play much a role.
Click to expand...

To be honest the only Souls-like aspect of this game that I don't like is: (as per this video https://www.youtube.com/watch?v=Lr2QQekdq44, starting from minute 9:33) "If you die, you become a ghost on the map until you visit the nearest resurrection shrine. Remember to collect your equipment or you'll lose it".

I just don't know if we have a specific amount of time before the equipment left on the map when we died just vanishes. If so then yeah, I don't like this. But except for this, I like the game.
Sou tricolor de coração!

Save anywhere is mandatory for me. I am often called away with only a few seconds notice.

crpgnut said:
Save anywhere is mandatory for me. I am often called away with only a few seconds notice.
Click to expand...

Yeah, I've had this quirky issue myself for years, now. Sometimes I'll start a game and just want to stop after fifteen minutes or so, saving anytime I wish to is a basic necessity these days, and has a lot to do with why I think I no longer use console systems. Often family will just stop by, or I decide I might want to pop out on the porch and read for a bit, frankly I've returned a few games over the past ten years simply because they don't offer an anytime-anywhere save function.

Why are the screenshots in a gameboy resolution? It is not possible to click on them even in the source either..... very strange one would think they'd want to show something which looks as good as possible.....

I work from home since the pandemia started, so... That's kinda hard to achieve.
Toka Koka

I like the look of the game and its lore seems interesting, too bad it's just one more of those action-rpg.

As if we don't have enough of those right now.

Anyway I love what I see and watched that I can't wait to play it.
"Founding member of the Grumpy Gamer Club & Never happy unless I'm complaining"

I could go with RTwP

Honestly, there are so many action rpg. And yes, quite a lot of "tactic rpg". What we need more, are full-fledged RPG, with exploration, character interactions, depth... Look at the list of the runner off for RPG of the Year, you can't say there are that many of them.