We wish you a Merry Christmas and a Happy New Roadmap!

We're rounding the corner on 2021 and we're going out with a bang!

We'll be taking some time away from socials during the holidays to recharge and gear up for 2022. You can expect us back and responding to players from the 5th of January.

Which leads us to the question: what's in store next for Mechajammer?

We've put together the Post Launch Roadmap below, which shows what's on the horizon for the game, and when you can expect updates.

Again, a her-uge thank you to the players who have stuck with us since the game's launching, helping surface issues, offering suggestions and generally helping shape our next steps. This Roadmap wouldn't be possible without your input.

So, here's how the next few month's are looking: 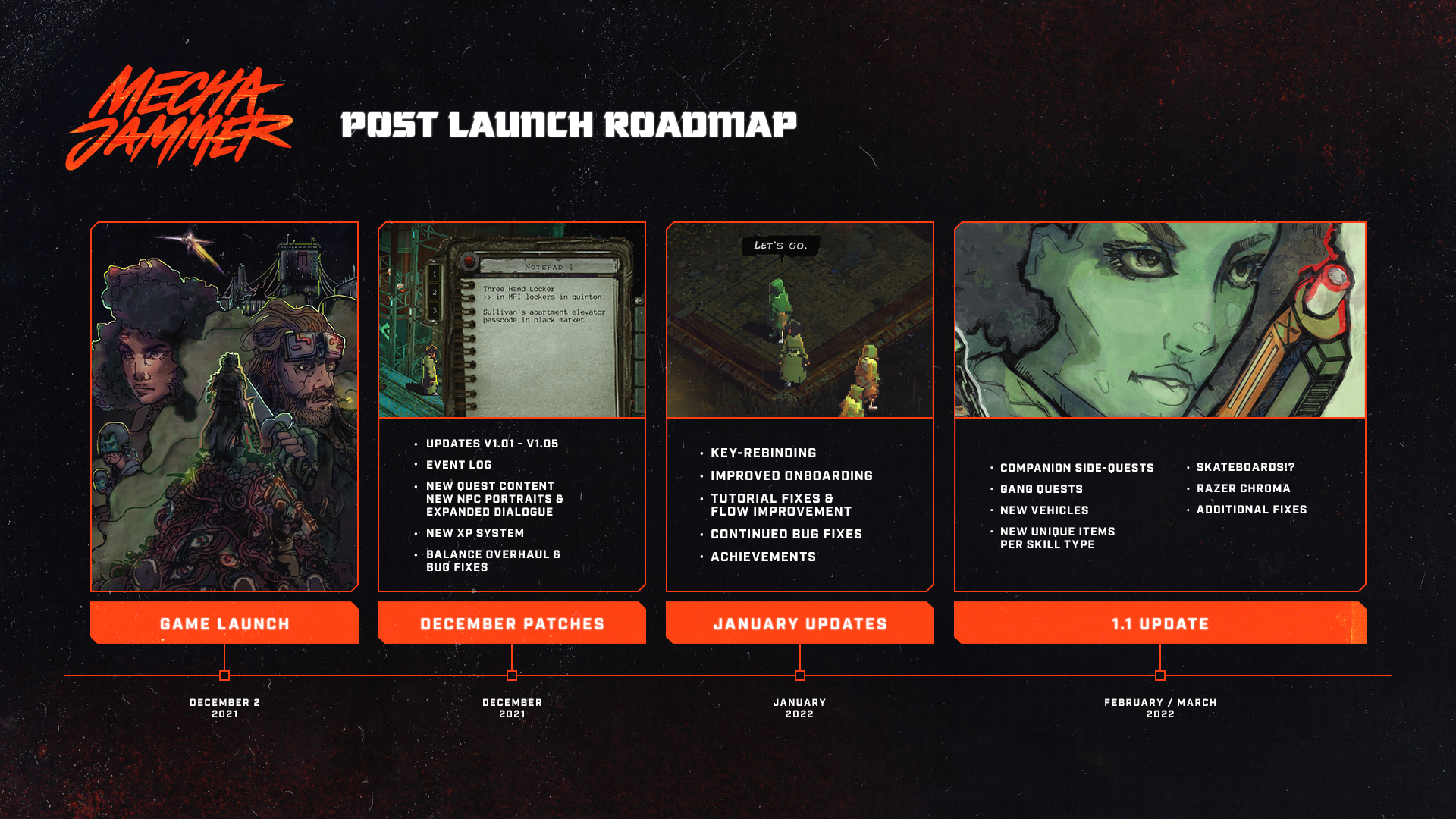 Since launch, we've put out 4 patches to the game, with a v1.05 on it's way very soon. That's not all though! You can expect unofficial branch updates until the end of December if you opt in to an exclusive 'off the grid' branch, but more on that in a minute.

You can expect to see a new XP system very soon, too, as well as a balance overhaul and more bug fixes.

Improved onboarding and tutorial-flow (we hear you, the tutorial isn't your favourite).

You can also expect Steam Achievements, along with an official achievement guide for those interested, too.

A new update was pushed yesterday:

The Mechajammer v1.05 patch has now been rolled out, bringing with it a huge list of fixes and improvements to leave you with over the Christmas break. You can also opt into the "Quinton Testing Branch" game branch over on the Mechajammer Discord Server. More details here.

Right, big stuff at the top:

You now have the choice of XP or collecting level-up chips in world during character creation. You'll need to start a new game to use XP. This was suggested by quite a few players at launch and we can't wait to see what you think of this new option!

(Quick note: re-spawning enemies, including refreshed patrols, rioters, and street enforcers do not offer XP, and factions only provide it after you've attacked or allied with them)

Armor operates by rolling a D6 pool, like aiming, but each dice acts as a boolean point of damage that can be absorbed. Each armor has two main properties besides auxiliary (durability, sell, buy, etc.), these are AC and success chance, visible in their description.

There are an additional 30 pieces of quality tiered inventory items to support this throughout the game. Future (and existing) slots for added AC modules still work, and they now add to the AC dice pool.

AC: xd
where the x is the potential damage can be absorbed by the armor, and also the number of dice being rolled to determine if it will work.
Success: >x
where x is the number the AC dice have to land over to successfully absorb a point of damage
Example: chest armor has: [AC: 5d] [success >3]. Armor rolls 5 six sided dice, and each one landing above 3 negates an incoming damage point:
<3> <6> <3> <4> <1>
Greater than 3: <6> <4>
Damage: -2

All enemy tiers have more varied health per encounter area, wider range of weapons and drops, as well as the new appropriate XP.

They mention that respawning enemies will not give XP. I was disappointed to hear this game has respawning enemies, which generally not something I like, unless there's a specific in game rationale for it, e.g., "robots will keep respawning here until you blow up the factory producing them".

I gather from people on the Discord that at least in some cases it's a bug, where enemies suddenly respawn in an area you just cleared after reloading a saved game.

That would be truly annoying, respawn is bad enough, yet to not even gain experience from them would be beyond aggravating, at least for me. Hopefully this is addressed before I get around to playing!!