If you have very low FOCUS (1) you may lose concentration in dialogues or reading computer terminals. If there's too much information, it turns to "bla bla bla" for you.

Why? Because Space Wreck is about role-playing even if it is inconvenient sometimes.

If you have high CHARM, you can play as a commander, giving direct orders to your followers. That means literally taking over their characters.

That means not just movement. You can directly manage their inventory - what armor, weapon to use, what drugs to consume, etc.

Also, they can use computer terminals and workstations for you, pick locked doors - this way you get to utilize the whole set of skills your team has.

Of course, if you fail the roll, your companions will refuse to follow your orders so this type of gameplay is suitable for high CHARM characters (4+):

P.S.
This is less of a feature and more of a bug fix but you can leave your companions now:

When you fail a pick-pocketing skill check in zero-G…

IMHO pick-pocketing always has been a tricky case in computer RPGs. If PC succeeds, excellent - risk and reward, a spike of adrenalin, skill application. But what if the attempt inevitably fails at some point?

Should NPC turn hostile? It seems a bit overkill (sometimes literally), plus, it may trash relationships with the whole group of people (town). Players would be afraid to use it…

Maybe NPC just grunts and shakes his finger? Turns out, players do love to exploit that - repeating pickpocket attempts until success. I don't mind the exploits per se but in this case, I think it robs the role-playing experience and immersion.

Here, NPC just instinctively pushes away the criminal. However, because it takes place in space - magnetic soles but it still is zero-G - the push is way more pronounced. You also get light bruising - lose a couple of hitpoints.
Last edited: May 1, 2021

If you have high CHARM, you can try to solicit sympathy from a hostile NPC. If you succeed the dice roll, the enemy will be unable to shoot you, feeling pitty instead and let you walk away.

Note that moving closer to the enemy or attacking it will trigger aggression nonetheless.

Destroyed robots are a good source for weapons and ammo but it requires at least minimal technical skills and a tool to extract them.

One thing that became clear from playthrough videos was that inventory management is a very substantial part of Space Wreck gameplay. To help with this, we added some new improvements that will definitely make life easier -

1) now item entries have small subtype icons associated;
2) there's a progress bar that clearly denotes how much carrying capacity you have left to spare.

Welcome to KROGUS-III - a refueling stop and entertainment station in the Asteroid Belt. At least that's what it was 20 years ago, before the Revolt.

On space stations and ships, everything is cramped. There is not much space in ... errr... space.

This has been a great challenge in development as there are high walls, narrow passages, and a fixed isometric camera. And, considering that game's maps are riddled with "secret" maintenance access tunnels, it is not only a decorative issue.

Good news everyone! Well, sort of...

First, we have a new start to the game - a sort of better version of Temple of Trials. On the other hand - unfortunately, (but, probably, unsurprisingly) - we have to postpone the release. I tried to sandwich this announcement in between E3 and Steam Summer fest but failed even that.

The very first area you start the game - KROGUS III Welcome Terminal - has been significantly expanded and reworked. Now it is your first quest - to get out of the terminal by any means necessary. I have counted 7 ways to do it but there may be more, some of them very simple, others - somewhat complex.

Explore the surroundings, meet a new character, scour the terminals, loot the containers, fight the cambots! You will get a taste of the whole game experience in the first 5-10 minutes.

Acting as a tutorial, this is effectively an escape room.

With this new update, your items will have item type-specific icons, so it is now easier to quickly find, for example, a weapon in the mess of things. The same goes for sorting toggles which also now feature a visual icon instead of a letter.

The other important thing is the carry load indicator - a big, prominent progress bar on the bottom of the items list. It displays how full your inventory is visual - so it is now easier to "sense" the encumbrance coming before it becomes an actual problem.

Based on the generous user feedback we have received about our demo, the game has drastically improved over these few months. Unfortunately, our original estimates, made before the demo release, have turned out to be imprecise - there is still a lot of work to be done to rework the existing content more in line with the list of improvements discovered from the demo.

As a result, we have to postpone the release. There is no specific date this time because - turns out - it's hard to estimate these kinds of things.

Just a reminder - our free demo version is essentially the first chapter of the full game and we are treating it as Early Access.

If you have some qualms, please let me know here, on the messaging board!

Stronger characters can move around barrels and boxes thus changing the environment to fit their needs. You can even build fortifications this way.

If spilled, the AnX compound quickly evaporates, filling any room within seconds and knocks out everyone without a spacesuit. The gas disperses quickly but people stay asleep until woken up. You can use this situation to your advantage, of course.

However, there are few caveats:
1) if you are seen doing this, they can become hostile (depending on your reputation);
2) it does not affect robots;
3) the item itself is quite uncommon.

You can also disperse knock-out gas in the vents. This way you don't risk detection and exposure.

And it's not just for fluff - you get +5 temp buff to your carry capacity! Additionally, if you are not wearing clothes, you can take a shower as well, which grants +1 temp bonus to your CHARM. Which can come in handy if NPC usually avoid talking to you.

(And even that is not all of it, if you want, you can take a look inside. You probably should not though.)

Subspray - non-invasive subdermal spray - can deliver any medication without piercing the skin (and patient - noticing).

For example, sleeping meds will knock the NPC out but the effect of any available drug can be applied to the victim.

You can stumble upon this biped robot while exploring the derelict space wrecks. Unlike cambots, there is no official info available about this machine though. 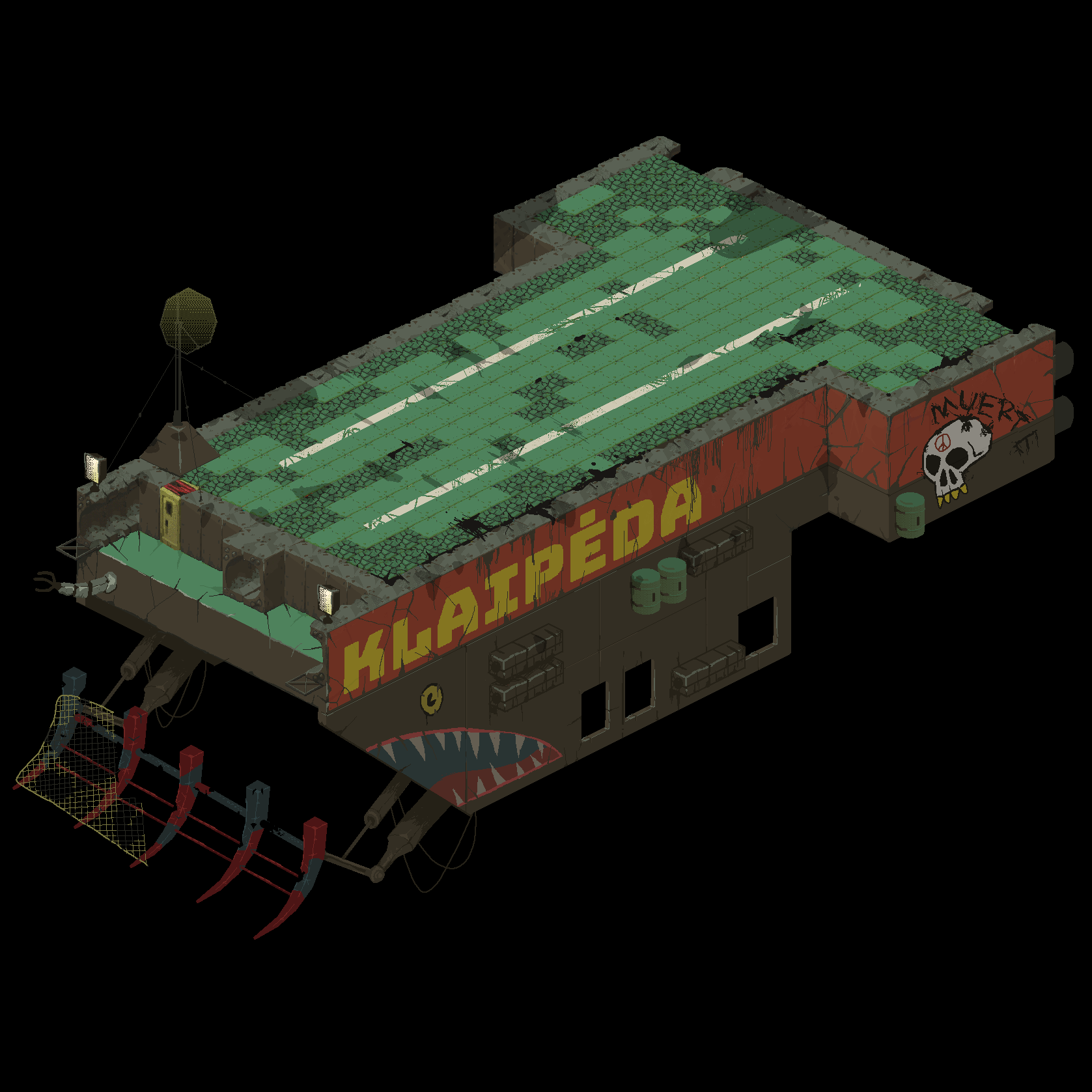 SMPSV Klaipeda is a small multipurpose space vehicle. Those can push containers, shuttle people and cargo, also deploy explosive charges to crumble the asteroid ore. Some of them have had a tumultuous and eventful service this far.

Change your clothes to stay under the radar!

Some groups in the game have specific uniforms - faction armor if you will - and if you wear it, you are perceived as a member of that group.

Note that this does not work with every group out there (e.g. demo) because a tight or small crew would easily recognize each other. "Faction armor" usually comes into play when there are societies with sub-groups that can be generalized as 'they' by others.

Yes, you can cut through the floor to access the level below.

Be careful where you cut through the floor. It's a vacuum out there, after all.

If you are intoxicated and roll a critical FOCUS failure on surface change (e.g. broken tile), you trip over and hurl through the space.