With the big names of 2006 behind us, it's time to turn our attention to 2007.  While there are some high profile titles, in contrast to 2006 there are few major franchise sequels but rather a raft of new IPs from both small and large players.  Even more exciting is the potential for some real successes from the indie market.  Interesting times.

Part 1 can be found here. 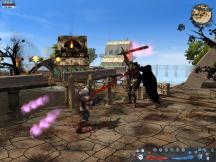 The hack & slash action genre keeps on keeping on and 2007 will see several releases.  The most interesting is probably Monte Cristo’s Silverfall with its steampunk theme, although Sacred 2 will undoubtedly attract a bigger audience.  Sacred has been a huge success with around 1.7M units sold and Ascaron is an experienced developer, so expect a solid release gameplay-wise.  Cyanide Studios should release Loki, Polish developer Rebelmind (Space Hack) will be looking to get Frater to the English market and Iron Lore will follow up their hit Titan Quest with the expansion, Immortal Throne.

While quite different to the preceeding Diablo-inspired titles, 3D fantasy action games are resurgent after last year's Dark Messiah and the upcoming Elveon and Project Offset. Both offer stunning graphics and player driven action, although Offset has no real RPG elements and might be described as a fantasy "shooter".

The single most exciting thing about 2007?  We might finally see the potential from the indie market that has long been debated and discussed.  While it’s primarily a happy confluence of timing than a burgeoning strength of the indie RPG market, there are several titles with stellar promise that should see the light of day in 2007.  That said, there’s a degree of faith that these titles will live up to their potential (or even get released this year) so the final proof will be in the playing. 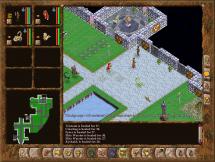 Jeff Vogel should kick the year off (as ever) with Geneforge 4 for the PC.  With the Mac version already out and receiving good feedback, this is one indie release that can be replied upon.  The early word is this iteration brings some of the most complex gameplay to come out of Spiderweb.

Iron Tower Studio’s The Age of Decadence has seemingly been substantially completed for a little while but has spent an extended period polishing up some of the graphics, text and user interfaces.  All of the information so far seems to indicate this title will offer an unprecedented number of choices interacting with quests and NPCs, deep factional gameplay and a strong skill system.  If they can get the gameplay right and offer some narrative interest, this has huge potential.

Basilisk’s Eschalon: Book 1 is due this year and aims to offer classic, turn-based RPG gameplay, a strong storyline, interesting skills (a Cartography skill?  Sign me up.) and clean 2D graphics. 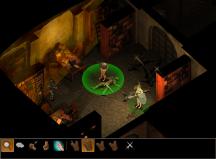 We’d love to see The Broken Hourglass released this year but Planewalker Games is being very careful discussing release dates and it’s hard to judge the current status from here.  Still, the team has a deserved reputation (from prior Infinity Engine mod projects) for interesting characters and interactions and what we’ve seen so far of the gameworld and mechanics (check out the magic system for some fresh ideas) are very encouraging.

Dropship from Michael McCarthy (ex-Troika) and Laidback Games certainly sounds interesting but there's not enough information to call the development status.  Finally, after a complete engine change, we’re looking forward to some lunch-time gaming with with the boardgame-inspired Dungeon Delvers.

As usual, a number of the projects we follow on a regular basis are from Russia (or CIS territories) where a healthy CRPG development environment exists because of cheaper production costs and less console domination.  Seeing these games released in English territories is unpredictable, primarily because 2nd tier English publishers are looking for titles that will be easy to bring to market with little investment and this has proven problematic with Russian games.

We will be following up this article at a later date with a more detailed look at the titles really worth watching from Russian developers.  Can Battle Lords from Katauri follow their former success at Elemental Games with Space Rangers 2? 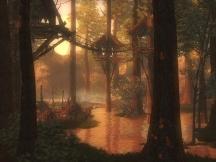 Hinted at for a long time we’re starting to see some small signs that Larian Studios is getting closer to officially revealing their current project.  Clearly based in the Divinity gameworld and with a slew of major middleware under license (GameBryo, SpeedTree, Meqon Physics, Kynapse AI), Larian is obviously aiming for the sky.

Hopefully we’ll discover what Obsidian has in store with their Alien RPG and they might have another title to reveal.  Surely we can expect a NWN2 expansion – and will they have plans for something along the lines of BioWare’s Premium Modules (is J.E. Sawyer's comment that his own project won't be a Premium Module inherent confirmation?).  Speaking of BioWare, what further plans do they have for their digital delivery platform?

While not officially announced the Gothic 3 expansion is public knowledge but we really don't know anything about the additional features or content - here's hoping it mirrors the quality of Night of the Raven.  Obviously this is an opportunity to polish the gameplay - perhaps a future Gothic 3 Gold might really live up to the potential in this game, particularly if the expansion adds some extra density and character depth to the existing world.  Whether a large body of players will embrace buying an expansion after the disappointing original launch of G3 remains to be seen.

Will Blizzard finally reveal the long-rumoured Diablo 3 and what has baby-Blizzard Castaway Entertainment been working on for several years?  Will Bethsoft officially unveil Fallout 3 this year?  If so, watch for the biggest storm of debate in CRPG circles for many years.  And will we ever find out what really happened to Lord of the Rings: The White Council and the English release of The Fall?

Pulling back from specific games, will 2007 see any particular trends? Apart from the long-term general action-isation of the genre, it's hard to pick any movements with confidence.  I'd like to predict the arrival of a thriving indie mid-tier market enabled by digital delivery but, frankly, there's little sign of a stream of new indies to follow this current batch.  I'd also like to predict this year's diversity and new IPs will continue but, again, it's not likely...2007 is just a trick of accidental timing (assuming the expected titles actually ship, of course).

The flow-on effects (if any) from the success of Oblivion will be interesting to watch.  It's worth pointing out that the wave of support for Oblivion comes on the back of officially reported shipments of 1.7M units (obviously more by now, but we don't have that data).  As a comparison, Ascaron's Sacred has sold approximately 1.7M units but it obviously didn't capture the same media mindshare.  Some detractors say the success of Oblivion will further "dumb down" the genre while others say such sales success can only focus positive attention.  I suspect there's some truth in both positions but I'm not sure the positive attention leads to more RPGs in development.  If the market and the media are only interested in huge, open-ended mega-epics, I think developers are likely to move on -- it's just too hard compared to taking on other projects.  Given that most game developments run to around three years, it will be a little while yet before we get those answers.