For almost one week you could vote for the Best Indie RPG of 2011 and we now present you the results of the RPGWatch editors and your votes. 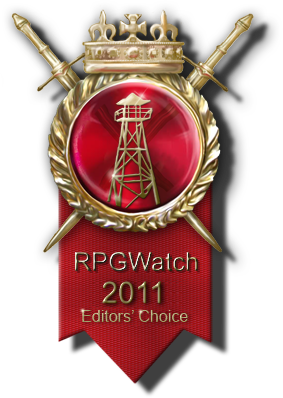 If you are a frequent visitor to RPGWatch then you will definitely know about Frayed Knights. It was one of last year's most anticipated indies of 2011 and for a lot of us it delivered on everything it promised. What Jay Barnson, developer of Frayed Knights, wanted to do with the game is bring back some of the RPGs of old like Wizardry and Might and Magic. He delivered in spades for a lot of us.

For those of you who are new to RPGWatch, Frayed Knights is a dungeon crawler similar to the Might and Magic series. The combat was turn-based and there were many skills to improve your four characters. Unlike the M&M series, Jay brought his own style of writing and humor to the game. If you are familiar with Monkey Island or Quest for Glory then you'll have a good idea of the style of writing the game offers. The writing is one of the best parts to this game. His humor is just as good,  if not better, than some of the professionally developed games out there - especially some of the newer AAA games which attempt to bring humor to a game, but only deliver the most base type of comedy.

While the game does have its flaws such as the graphics and, to some, the UI, it delivers on all that was promised: a computer RPG of comedy and high fantasy. Editors' Runner up: Dungeons of Dredmor 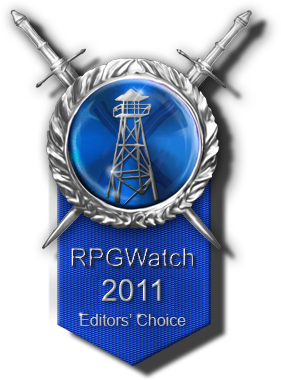 Dungeons of Dredmor brings the roguelike to the mainstream by giving it graphics, tons of skills to improve and humor. The first two they delivered in spades, the last is up to debate, but what can't be debated is that Dredmor was a major success for Gaslamp Games.

While games like Diablo gutted the roguelike genre to appeal to a wider audience, Dredmor tries to retain more of it's roguelike nature such as turn-based combat, difficult monsters to battle and permadeath. The last two could be controlled before you start the game. If you wished for a more "roguelike" game then all you need to do is turn on permadeath and set the difficulty as high as it could go or if you wanted an easier time with the game then all you need to do is turn off permadeath and set it to easy. This worked to appease the more hardcore of the genre and the casual player. No matter what difficulty you chose you still needed to be careful in Dredmor because even some of the skills need to be handled with care or they could easily destroy you as well as the monsters you face.

Dredmor is a worthy winner. It kept the spirit of the roguelike genre alive while appealing to both the roguelike fans and casual players. Basically it comes down to being just a fun game to play. 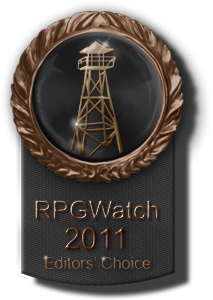 Spiderweb's first new setting for many years, Avadon is a streamlined but more polished experience along with the depth of content the studio has reliably provided for well over 15 years. At first glance, Avadon is a standard fantasy setting that lacks the individuality of Avernum or Geneforge but Jeff Vogel weaves an interesting story of conspiracy and betrayal. Although the game is more linear than many of their past offerings, there are plenty of hidden dungeons, optional side quests and different routes as well as multiple endings to spice up the gameplay. Avadon also introduced companion-styled party members with dialogue and their own quests, clearly taking some inspiration from BioWare.

But the biggest impact for many was a suite of new graphics - it's still very low-tech but the improved icons and tiles crept past the minimum entry barrier for many, introducing new players to Spiderweb who had previously overlooked their games. 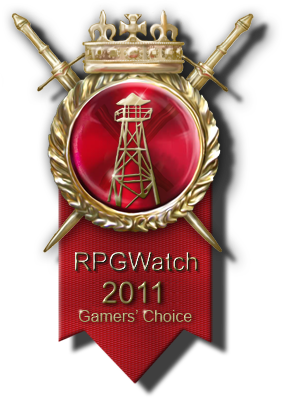 Bastion is a very clever example of streamlined gameplay designed to appeal to a wide audience, without necessarily alienating hardcore players. It isn't a typical action/RPG but rather a hack'n'slasher that has very carefully stripped away unnecessary elements and substituted some innovative ideas, such as the optional shrines that allow players to choose additional challenges in return for more XP. XP unlocks slots for "tonics" - potions that improve stats or provide other benefits. Instead of the usual inventory management, you only carry two weapons at a time but the loadout can be swapped around and each weapon has five upgrade levels.

The carefully crafted gameplay isn't the obvious hook, however. Bastion features beautiful art and the world literally falls into place around the avatar - an effective visual trick that also subtly urges the player onwards. A voiceover narrator continuously describes the individual actions of the avatar, which is a unique way to present the story and the acoustic soundtrack is charming. Supergiant clearly designed the game to stand out visually, with sound and gameplay and the result is a polished and different experience.

Gamers' Runner up: Dungeons of Dredmor 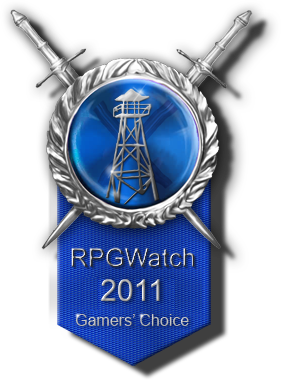 Like the editors, our vistors selected Dungeons of Dredmor as the runner up as well. 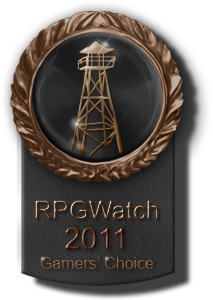 And also for the third place we share views on Avadon: The Black Fortress.